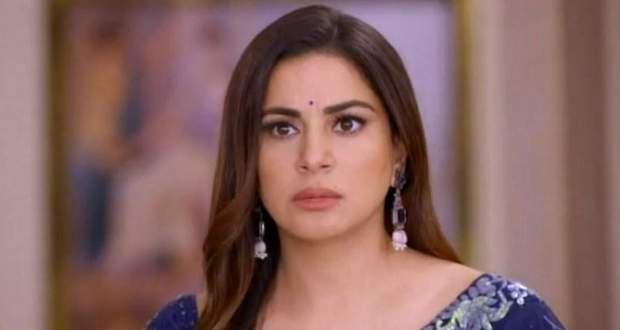 Today's Kundali Bhagya 20th May 2022 episode starts with Karan going to save Natasha remembering her location.

Meanwhile, Shrishti asks Preeta what will happen if Sherlyn gives the money.

Preeta tells them that Prithvi will only approach the company for that amount but without her sign, he cannot withdraw a Rupee.

Preeta tells them to call Sherlyn immediately and that too from somewhere where she can see her reaction.

In the meantime, Natasha calls Karan from the kidnapper's number and tells him her probable location.

Elsewhere, Karan arrives at a warehouse to save Natasha and takes the culprit to the police station.

After a while, Preeta calls Sherlyn and asks her to come to Hazel Hotel, to get the proof that she has against Sherlyn.

Sherlyn gets scared after receiving a call whereas Shrishti is curious to know why has Preeta not asked for money right away.

Preeta explains to her that she needs to make Sherlyn believe her story and also needs to give her time to arrange money.

Later, a reporter calls Preeta to comment on the divorce article which makes Preeta angry and she warns Karan to resolve the matter himself.

After the call, Sherlyn goes to Prithvi and tells him about the situation and asks him to accompany her to the hotel the next day.

Afterwards, Rakhi questions Karan about his intentions toward Preeta and councils him about her.

She also tells him that Preeta is selfless and has never spent a dime on herself. She has turned their life around after taking control of the business.

She compares Prithvi’s tyranny with Preeta’s behaviour as the owner of the house and also what she has done for Mahesh.

On being warned by Rakhi about marrying Natasha, Karan finally tells her that he is only playing a drama to make Preeta accept him for love and stop talking and worrying about money.

Meanwhile, Shrishti asks Preeta to tell Karan her truth and that will solve all the misunderstandings between them.

However, Preeta explains that love need not be proven and if it does then that love is questionable.

Karan tells Rakhi that he loves Preeta like before and does not want to lose her which makes Rakhi happy and Sameer also overhears Karan and smiles brightly.