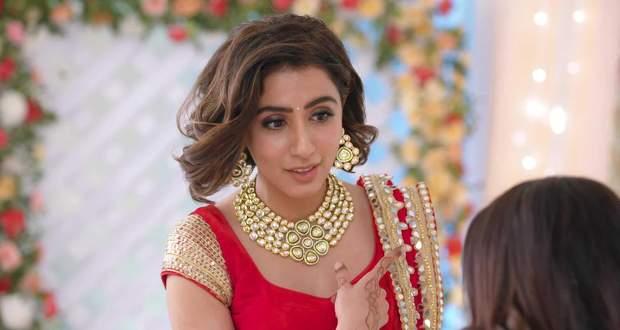 However, Karan likes fighting Preeta while Rishabh asks him to increase their love. Sameer and Rishabh tease Karan while he threatens to complain to Rakhi.

Rishabh and Sameer know that Karan has feelings for Preeta. Meanwhile, Preeta tries to get out of bed but again feels pain in her stomach.

Dadi and Kareena rebuke Mahira for eating. Mahira makes a plan in mind and says she was feeding Sherlyn as she was not feeling well.

Dadi and Kareena apologize to Mahira while Mahira says she is not doing drama like Preeta. Mahira eats after they leave and get happy with the successful plan.

Kareena and Dadi ask Rishabh about his worried state while Rishabh is unable to tell anything. Karan comes at the same time and reveals Rakhi is keeping fast.

Dadi cares about Preeta while Kareena thinks she is behaving like Rakhi. Further, Mahira comes there and introduces herself as Karan’s wife.

Preeta also arrives and feels pain in the stomach again. Preeta goes in a corner to rest for a while but Mahira comes there.

She mocks her for being sick and indirectly tells her that she is giving her the pain. Mahira warns Preeta of throwing her out of the house while Preeta is in pain.

© Copyright tellybest.com, 2020, 2021. All Rights Reserved. Unauthorized use and/or duplication of any material from tellybest.com without written permission is strictly prohibited.
Cached Saved on: Thursday 21st of January 2021 07:44:19 PM