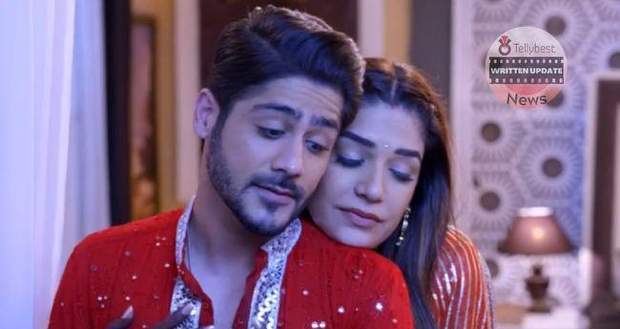 Meanwhile, Rishabh comes to Preeta’s room with medicines but Preeta tells him that she needs to eat something before taking the medicine.

Rishabh realises his mistake and goes to get the food while diverting Preeta’s attention to the moon.

Seeing the moon, Preeta gets lost in the memories of past Karwachauths with Karan which is interrupted by Arjun bringing food for Preeta in a waiter’s disguise.

Arjun argues with Preeta and tells her to eat herself but Preeta gets offended and tells him that he has performed the task of delivering the food and now he can go.

Just then Rishabh comes in and asks Preeta to not be formal as all the emotions reside in the heart and she has them for him.

Meanwhile, Rishabh gets distracted by a phone call while Arjun uses the opportunity to insist that Preeta eat sweets offered by him.

Preeta and Arjun dance with each other while being lost in their touch and smiles.

Arjun follows Preeta but she hides while he searches for Preeta when Preeta comes from behind and shuts his eyes and hides again.

Just then Arjun sees Shekhar in his room and comes out of his imagination.

Arjun looks curious to see Shekhar in his room who has come to tell him that he likes his proposal more than Rishabh and they will announce it in the next meeting.

Later, Rishabh and Preeta come down to take their leave.

Radhika and Maasa try to stop them but Rishabh is concerned about Preeta’s health.

Just then Arjun comes there and accuses Rishabh of not taking care of Preeta as he should have.

Preeta defends Rishabh and tells Arjun that it was an accident and it could have happened to anyone.

Later, Arjun arrives home to find Anjali waiting for him and happily tells her that he has broken Preeta’s fast today.

Anjali looks disappointed and tells Arjun to not forget his goal.

Arjun stands in defence and tells Anjali that he is focused on his target and will take all the deals from Rishabh.

Afterwards, Arjun confirms with Anjali about the next day's meeting and goes to rest.

Elsewhere, Rishabh and Preeta arrive home where Rakhi and Shrishti welcome them with open arms.

Later, Preeta shares with Shrishti about Arjun being in Jaipur and everything else that happened there.

Shrishti looks worried about Arjun's intentions and finds him to be mysterious.

However, Sherlyn is fuming in anger at the past events and throws the tea and asks Prithvi to take revenge for her.

© Copyright tellybest.com, 2022, 2023. All Rights Reserved. Unauthorized use and/or duplication of any material from tellybest.com without written permission is strictly prohibited.
Cached Saved on: Monday 21st of November 2022 05:56:17 AMCached Disp on: Saturday 10th of December 2022 02:36:56 PM