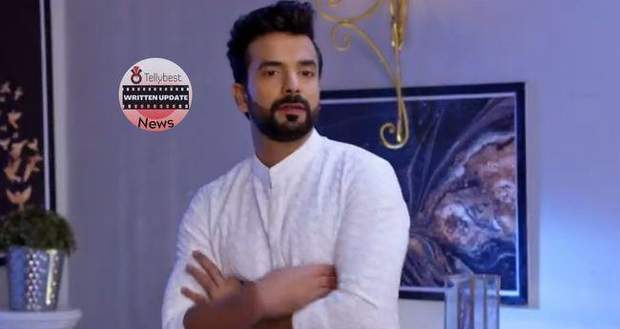 Today's Kundali Bhagya 20th September 2022 episode starts with Prithvi being surprised to see so many people in the Library when the lights start flickering.

Prithvi thanks God for working in his favour for sending everyone away.

Meanwhile, Arjun comes to Kavya's school while Kavya's class teacher Promila gets infatuated with him.

Promila assumes Arjun as Kavya's dad and shows him the way to Library.

In the Library, Prithvi asks God to not let the lights flicker again as Preeta is afraid of the dark.

At the same time, Preeta enters the library while Prithvi looks lovingly at her.

Arjun is walking hastily to reach the library as he does not want Prithvi to harm Preeta.

Prithvi becomes naughty and starts saying Preeta's name in a husky voice and hides to play with her.

Preeta starts searching for the voice when the light again goes off.

In the dark of the room, Arjun snatches Prithvi out of the library and fights with him.

Prithvi gives one punch to Arjun and Arjun gets ready to punch thousand times to Prithvi while Prithvi is not able to tolerate even one punch from Arjun.

Cooling down the situation, Prithvi says they are not enemies but rather friends and they should not fight.

However, Arjun holds Prithvi by the collar and asks him to stay away from Preeta.

Arjun's words for Preeta make Prithvi realize that Arjun is also in love with Preeta.

Arjun once again warns Prithvi to stay away from Preeta else he will beat him to a pulp.

Just then, Prithvi drops Preeta's phone but before Arjun can pick it up, a teacher comes there.

Arjun gives Prithvi’s phone to her and tells her that someone has dropped it while going to rest room.

After a while, the teacher takes the mobile to the washroom but its video button was on and everything gets recorded on it.

Seeing Preeta is afraid Arjun decides to tease her.

Preeta gets scared and begins to recite Hanuman Chalisa to seek God’s help.

Preeta is astonished to hear God’s voice while Arjun tells her that she had called him.

Preeta questions him about knowing her name while Arjun tells him that God knows all.

However, Preeta tricks him by asking her father’s name.

Unable to get a reply Preeta understands that someone is trying to fool her and stealthily walks towards the voice and catches Arjun red-handed.

Arjun offers to take Preeta out of the Library but Preeta in her anger tells her that she would prefer to spend the rest of her life here instead of going away.

Arjun pretends to leave while Preeta scolds herself for not following Arjun outside.

© Copyright tellybest.com, 2020, 2021. All Rights Reserved. Unauthorized use and/or duplication of any material from tellybest.com without written permission is strictly prohibited.
Cached Saved on: Saturday 1st of October 2022 09:51:40 PMCached Disp on: Sunday 2nd of October 2022 11:26:55 AM