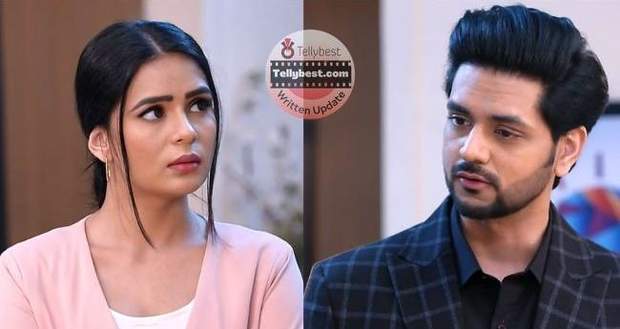 Today's Kundali Bhagya 21st December 2022 episode starts with Dadi asking Anjali about Arjun’s relationship with Kavya and warns her to not hide anything from her as she has seen this world more than anyone.

Seeing the determined look in Snigdha’s Dadi’s eyes, Anjali decides to tell her the truth.

Meanwhile, a couple on the plane is being cute and cheezy with each other when another rude passenger interrupts them and tells them to leave the passage.

After a while, a small girl comes to sit beside Kareena.

Later, Kavya asks for a ball and Rakhi and Shrishti convince her to give it to her.

Arjun who is in disguise collides with Preeta who stands up to grab the bag and they hold an eye-meeting moment.

Just then, Kavya goes to get the ball and sees the knife in the shoes of the passenger, she tells Preeta but she takes it lightly and tells Kavya to sleep.

Meanwhile, someone in the plane is showing Kavya some magic trick which reminds Preeta of Arjun.

In the meantime, Snigdha’s Dadi is shocked to hear about Arjun’s tragedy and sympathises with his situation.

However, Anjali tells Snigdha’s Dadi to not pity him as he is a God’s gift who is loved by all.

Anjali is worrying about Arjun who will remain restless until he finds Kavya.

At that moment, Anjali’s assistant comes to inform her about Arjun boarding the flight.

Snigdha’s Dadi becomes happy and tells the assistant that his salary just increased 50 per cent more.

However, Anjali stares at the assistant and tells him that she will only give him a raise this month only.

Later, Kavya is going to the washroom and falls flat and Arjun picks her up before Preeta while Preeta looks weirdly at Arjun.

In the meantime, Snigdha’s Dadi asks Anjali what will happen if Rishabh finds out about Arjun’s presence on Kavya’s flight.

However, Anjali is sure that Rishabh will not find out anything and even if he does then too it will be too late.

Later, Rishabh talks to Sameer that he will be taking Arjun down soon now that his family is safe from him.

Meanwhile, Rishabh’s detective tells him about Arjun’s presence at the airport.

Rishabh calls Anjali who gets worried seeing his number but later pretends to be with Arjun so that Rishabh does not suspect anything about Arjun.

As expected Rishabh falls for the bait, and tells his detective that he must be mistaken.

Later, the Air hostess tells Preeta to sit as the plane is about to take off while Preeta tells her that her daughter is inside the bathroom.

After a while, the air hostess tells Preeta to sit nearby as the plane is about to take off.

Meanwhile, Preeta is scared of the takeoff and starts reciting Hanuman Chalisa while Arjun makes fun of her.

Afterwards, Preeta in her fear holds Arjun’s hand, who is sitting beside her.

© Copyright tellybest.com, 2022, 2023. All Rights Reserved. Unauthorized use and/or duplication of any material from tellybest.com without written permission is strictly prohibited.
Cached Saved on: Thursday 26th of January 2023 09:04:57 AMCached Disp on: Wednesday 1st of February 2023 05:59:56 PM