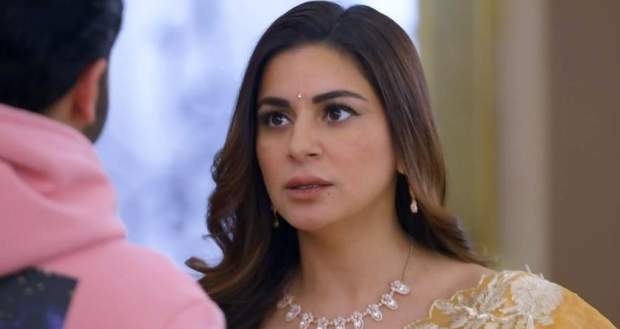 Kareena boasts of knowing Preeta’s truth from day one and is delighted that now Preeta will be shown her true place.

Coincidently, Karan is leaving the house in a hurry but stops when Kareena calls after him.

Karan who is already disheartened at Preeta’s behaviour becomes more agitated while Kareena accuses Preeta of being selfish and opportunistic.

However, Karan feeling unhappy and helpless for not being able to celebrate Mahesh’s birthday leaves them standing.

While in the kitchen, Preeta sends Mona on a false errand and investigates Mahesh’s food and finds it pungent smelling.

However, Preeta decides to wait for the right moment to expose Mona.

In his room, Prithvi is talking to himself while blaming Preeta for everything that has gone wrong so far.

He admits to having some kind of secret weapon that could bring Preeta on her knees. He pledges to destroy Preeta.

Meanwhile, Sherlyn enters Prithvi’s room to fight about Kritika favouring him over Preeta. She also warns Prithvi to stop taking her lightly.

Later, Sameer tries to comfort Karan and asks him to have faith in Preeta.

Seeing Karan not changing his stance, Sameer changes tactics and insists Karan at having dinner with the family to mark Mahesh’ birthday and please Rakhi.

On the other hand, Kritika finds Prithvi and Sherlyn together and questions their togetherness.

However, Prithvi charms her with his lies.

While everyone gathers for Lunch, Preeta plays innocent on Mona’s rude behaviour for having been asked to prepare food for Preeta.

Later, Preeta after having a bite of salad prepared by Mona starts to feel unwell and falls off her chair while trying to stand.