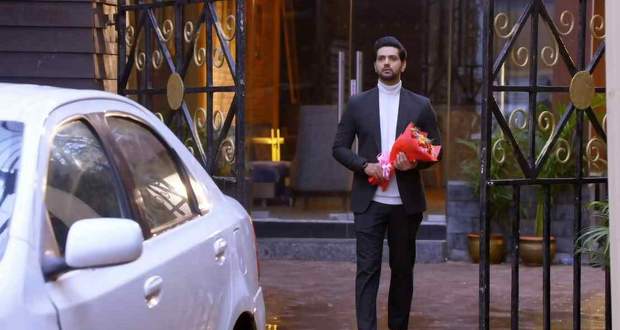 Today's Kundali Bhagya 21st July 2022 episode starts with Rishabh getting annoyed as he enters the office while his secretary comes there and informs him about Arjun.

Rishabh tells his secretary and the guards to politely tell Arjun to leave and use the police force if he refuses from now on.

Back at the Luthra house, Sameer rushes to the office while informing Rakhi about Arjun's break-in.

Further, Shrishti asks Rakhi why she cares for Arjun and talks about him dearly while Rakhi says that she just feels like she has a connection with him.

Elsewhere, Anjali rushes as she follows Arjun's car who is speeding his car in anger.

Arjun hits the steering wheel angrily at Rishabh and calls someone telling him to meet immediately.

Meanwhile, Anjali gets stuck on a signal and loses sight of Arjun's car.

Back at the Luthra house, Shrishti and Rakhi get tense seeing the garland from Karan's frame fall off and talk about Arjun once again.

Biji comes there and asks them why they look tense while Shrishti tells her how Arjun is bothering Preeta and barged into Rishabh's office.

Further, Rakhi requests Biji to not inform Preeta about Arjun barging into the Luthra office while Preeta overhears them and gets worried.

Preeta immediately goes to her room and calls Rishabh telling him to be careful of Arjun and she is sure he is trying to harm the Luthra family.

However, Rishabh calms Preeta by telling her to not worry about Arjun as he will handle everything and to not think about Arjun as it will affect her mental health.

Elsewhere, Arjun meets two goons at a bar and tells them that he wants to hire them to kill Rishabh Luthra in exchange for money.

The goons joke and say that they will do the work the next day but Arjun insists they do it on the same day only.

The goons agree and offer to have him show the whole assassination live for an extra fifty thousand and Arjun agrees.

However, Arjun thinks to see the whole thing with his own eyes and buys an office building in front of the Luthra building.

After some time, Anjali and Arjun are at the building in front of Luthra's office while he goes to the washroom.

Just then, the goon calls and Anjali picks up the call making her learn about the bribe.

© Copyright tellybest.com, 2020, 2021. All Rights Reserved. Unauthorized use and/or duplication of any material from tellybest.com without written permission is strictly prohibited.
Cached Saved on: Sunday 2nd of October 2022 10:17:06 PMCached Disp on: Thursday 6th of October 2022 04:02:18 PM