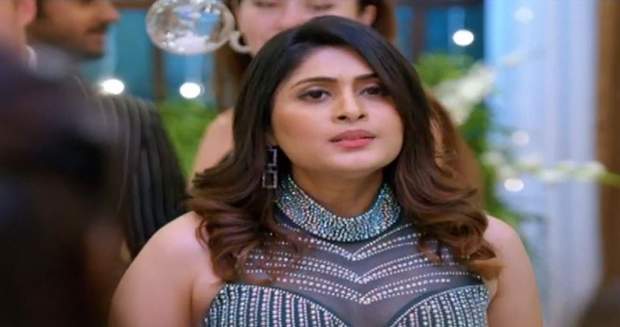 Rakhi introduces Pandit Ji to Sameer and Shrishti and tells him that they are the reason for this veneration.

Panditji stops Rakhi in the middle and looks around the house while they all look at him fearfully.

Panditji goes inside and sits at the Hawan site and begins to make preparations while everyone watches him.

As Kareena tells him that Rishabh is in the office Panditji stops her and tells Rakhi to bring something of Rishabh and after that only he will finish the veneration.

Panditji stops Preeta from leaving while Kavya offers to bring something of Rishabh from the room.

However, Kavya brings Karan’s bracelet from Rishabh’s room which Panditji uses to perform the veneration.

During the veneration, Panditji sees the image of Preeta’s marriage with Karan.

Elsewhere Arjun is reacting to something which makes the doctor worried.

Panditji tells everyone that Pooja is finished now and calls the couple to tie the Kalava.

As Rishabh is not home Pandit Ji ties the Kalava on Karan's bracelet.

Panditji tells them after veneration that a big storm is brewing.

He observes Karan’s photo and gets furious at them and scolds them that they have committed a misfortune.

Panditji snatches the garland from Karan's picture and throws it away which Rishabh catches.

Panditji tells them that this mala is not for living but only used for the dead.

Rishabh tells him that Karan is dead and that is why this garland was on his picture.

However, Panditji tells him that Karan is alive and living in this world.

At the same time, Arjun is remembering his accident at the bridge and calls Preeta’s name.

Preeta is shocked to hear of Karan and asks him what he wants to say about Karan.

Rakhi tells Panditji that Karan died in an accident a few years back.

However, Panditji adamantly tells Preeta that Karan is alive as he has seen his face with Preeta in the holy fire and only living faces are seen in it.

Panditji tells Preeta that her husband is alive and she shouldn't have married Rishabh.

Preeta runs away from there while Panditji asks her to try thinking of him and he will come rushing back to her from wherever he is.

Rishabh gets angry at Panditji for playing with Preeta’s emotions.

© Copyright tellybest.com, 2022, 2023. All Rights Reserved. Unauthorized use and/or duplication of any material from tellybest.com without written permission is strictly prohibited.
Cached Saved on: Tuesday 22nd of November 2022 07:31:45 PMCached Disp on: Friday 9th of December 2022 06:03:29 PM