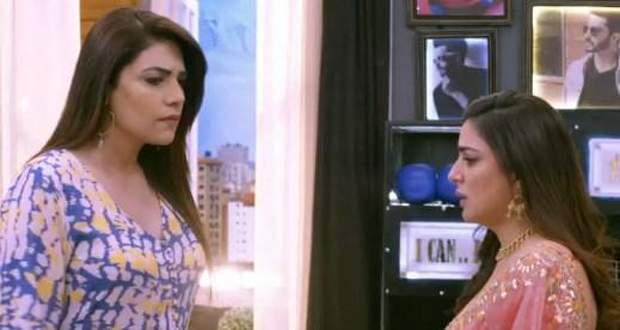 Natasha tells Karan that he should take back Preeta's power by stealing Preeta's property papers.

Later, Sameer hears Natasha talking to Karan and berates her for being in Karan's room at night.

Meanwhile, Preeta calls Shrishti to update her about the happenings at the house.

Afterwards, Preeta pretends to be asleep and waits for Prithvi.

After sometime, Sherlyn hides behind a sofa on seeing Dadi and Kareena come into the room.

Later, Sherlyn spots the property papers lying on the table and goes to steal them.

Just then, Karan comes inside the room, embarrassing Sherlyn.

While trying to leave, Sherlyn collides with Natasha and shouts.

Pretending to wake up, Preeta innocently asks everyone about their presence in her room.

On being caught, Dadi makes an excuse about Karan's sleepwalking and following him here.

After sending everyone back to their room, Preeta once again pretends to sleep and wait for Prithvi.

On the other hand, Sherlyn goes to Prithvi's room, where Prithvi makes fun of their failed attempt at stealing.

Later, Sherlyn tries to convince Prithvi to steal the papers.

However, Prithvi assures Sherlyn about stealing the papers at the right time.

The next morning, Shrishti calls Preeta to get an update on the plan's success.

Meanwhile, Preeta realises that she has fallen asleep sometime in the night and rushes to check the papers.

Later, Preeta was telling Sherlyn about family members' failed attempt at stealing the papers and hears someone shout.