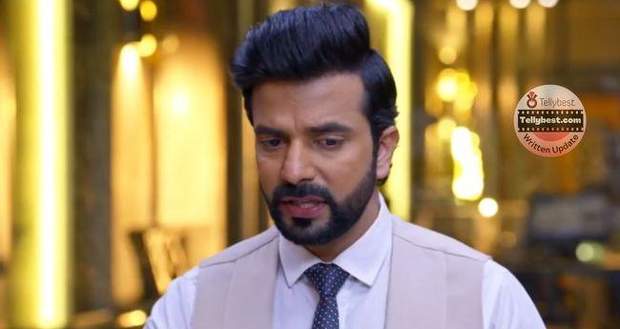 Rishabh politely refuses tea saying he is getting late and Preeta is waiting.

Anjali apologises to him for her behaviour at the office and insists on him to accept the offer of tea as a sign of forgiveness.

Later, Anjali gets down from the car and pretends to sprain her feet.

Rishabh immediately comes to assist her and insists on taking her inside.

Meanwhile, Rakhi is worried about the sudden change in weather when she observes Dadi sitting alone and comes to sit with her.

Dadi praises Rakhi for being a good daughter-in-law and tells her that she has taken care of her better than her own daughter.

In the meantime, Rishabh brings Anjali inside and helps her sit on the sofa.

Seeing Rishabh leave, Anjali once again forces him to stay for tea.

Meanwhile, Anjali asks Rishabh to help her deal with some legal papers and asks him to take her to the study.

After a while, Anjali comes too close to Rishabh on the pretext of taking his support while Rishabh gets away from her.

Seeing Rishabh drink, Anjali thinks to herself that tonight he cannot leave until he takes her to bed and then the story about the night will tear his reputation.

Elsewhere, Rakhi sees the holy lamp blown away in wind and being superstitious, becomes worried.

Meanwhile, Anjali tells Rishabh to have one more drink while her maid brings tea for them.

Later, Rishabh is ready to go when Anjali holds his hands and tells him to prepare another drink before leaving.

Impossibly polite, Rishabh agrees to have one more drink.

Rishabh scans through the papers while drinking when Anjali comes very close to Rishabh and tells that she likes him a lot and finds him handsome.

Rishabh untangles himself from her hold and is about to leave when Anjali intentionally falls on the floor.

Rishabh comes back to lift her but Anjali drags him down on herself and asks him if he has feelings for her too.

Meanwhile, Dadi tries to calm her but Rakhi continues to worry and tells Dadi that ever since Karan’s death she gets scared at little things for Rishabh.

She tells Dadi that Rishabh is now alone and misses Karan a lot after his demise.

Dadi comforts Rakhi telling her that Rishabh’s whole family is with him even though Karan is not there.

In the meantime, Kavya calls Rishabh on a video call and sees Anjali in the background.

Rishabh tells her that he'll be home in half an hour.

Later, Anjali accosts Rishabh once again and takes off his waistcoat and unbuttons his shirt.

Afterwards, Rishabh frees himself and walks away from her in a dishevelled state while Anjali’s maid witnesses him leaving.

Elsewhere, Arjun watches Snigdha’s Dadi searching for some medicine and offers to get some for her tomorrow.

She tells him to get the medicine from a store near Devi’s temple and also an iron ring from there as she has nightmares.

After a while, Rishabh returns home and contemplates Anjali’s behaviour and the reason behind it.

Later, he decides to not tell Preeta anything as she is already stressed.