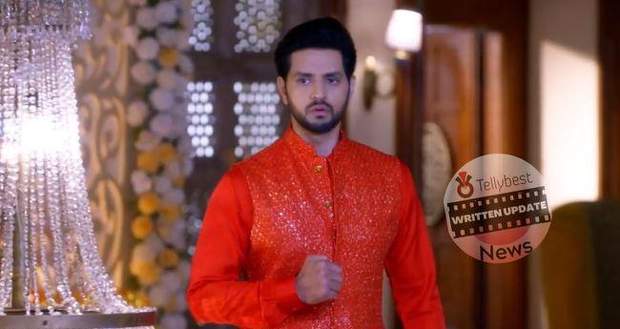 Today's Kundali Bhagya 21st October 2022 episode starts with Sherlyn asking Prithvi if he will avenge her or not.

Prithvi tells her that he will certainly avenge her but it takes timing and planning.

Sherlyn threatens to take her life if Prithvi stalls anymore.

Seeing the knife scares Prithvi and he tells her that he will kidnap Kavya who is a weak spot for Rishabh and Arjun both and extort money from them.

Meanwhile, Arjun meets Kavya at the traffic signal and shares her chocolate with him.

Just as Kavya’s car passes by there was a huge blast and chaos occurred at the place.

The terrorist shoots people randomly and runs away while Arjun comes to offer help to people who get wounded during the attack.

Meanwhile, the terrorists run away in the chase and decide to take refuge in the school while police continue to warn them.

Just then a media van also arrives at the scene and starts covering the police and terrorists chase from close by.

However, one of the reporters becomes the shield for terrorists and helps them get into the school.

Afterwards, they released the reporter and locks the school inside.

Later, the terrorist comes across Kavya’s classmates and puts them at a gunpoint.

Meanwhile, the reporters tell the live media that St Stefan's school is under cease.

The police inspector tells the media that the terrorists are known to be heartless and show no mercy to anyone and now children’s lives are in danger.

Meanwhile, Kavya has a fight with a schoolmate and is coming out of the library when she meets Prithvi who picks her up and takes her with him telling her that he is taking her to her father.

Elsewhere, Rishabh is in the meeting and is expressing his anger to see so many faults in the Palace projects.

Rishabh tells his staff that it is their overconfidence that will cost them this project.

He also asks Sameer and others to put their mobiles on silent as it is disturbing the meeting.

Meanwhile, Kavya tricks Prithvi and runs away from there asking the terrorist to hand over his gun to her so that she can shoot the uncle who wants to kidnap her.

The terrorist tries to scare Kavya but she cutely argues with them and tells them that she is not afraid of anyone.

However, the terrorist puts Kavya’s teacher at gunpoint and tells her to stop talking or else they will shoot her.

Prithvi is also surprised at Kavya’s fearlessness and hopes she stops and does not make them angry.

Meanwhile, Biji and Janki banter with each other while complaining to Preeta and Shrishti.

Elsewhere, The terrorist threatens Kavya with a knife when the teacher and other students request him to not hurt Kavya.

© Copyright tellybest.com, 2022, 2023. All Rights Reserved. Unauthorized use and/or duplication of any material from tellybest.com without written permission is strictly prohibited.
Cached Saved on: Monday 21st of November 2022 11:22:44 AMCached Disp on: Thursday 1st of December 2022 01:47:51 AM