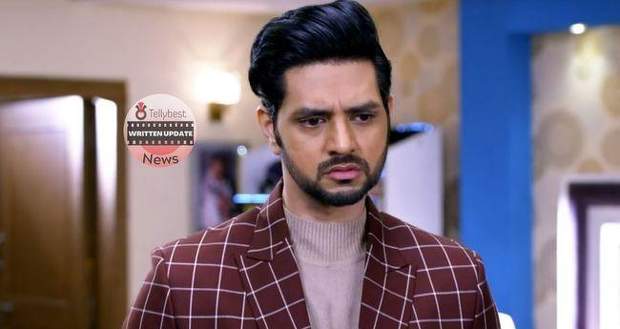 Today's Kundali Bhagya 21st September 2022 episode starts with Preeta feeling suffocated and weak at not being able to find a way out.

Arjun who was enjoying Preeta’s discomfort become worried to see her seriously suffocating.

Arjun helps Preeta get up and asks her if Preeta is a real doctor or has filed for her exams.

Preeta freezes at the moment when Arjun praises her beauty and then is about to faint when Arjun helps her move out.

Outside the library, Arjun tells Preeta to not bother thanking him or saying sorry as she doesn’t know how to do both.

Preeta questions Arjun for talking so immaturely to her and tells him that she is a married woman.

Arjun makes fun of her and tells her that she is not his type.

Preeta asks his reason for talking weirdly to her if he has no interest in her while Arjun tells her that he was only trying to distract her.

Meanwhile, Prithvi realises that his phone is missing and stops a teacher when Arjun interferes and paints Prithvi in a bad light.

Later, Arjun tells him to not interfere in his business with Luthra.

However, Prithvi accuses Arjun of having designs on Preeta.

Meanwhile, Preeta finds Prithvi’s mobile in the lady's washroom while a teacher tells her that he is roaming outside.

Preeta comes out and points out toward Prithvi which makes him puzzled.

Prithvi is happy to find his phone with Preeta unaware of why Preeta is angry.

Preeta accuses Prithvi of behaving disgustingly and leaves his phone in the bathroom.

Arjun plays along and shames Prithvi in front of all teachers.

Prithvi tells Preeta that it is all Arjun’s doing while Arjun tells her that he is innocent.

Preeta tells everyone that Prithvi is the worst kind of person and they all begin to beat him.

Arjun tells them to tie Prithvi and shut his mouth.

Meanwhile, Police arrive at the school and Arjun asks the police to put Prithvi under arrest.

Prithvi tries to stop them but the police do not pay any heed to them.

After a while, a teacher thanks Arjun for taking care of them.

Preeta also thanks Arjun for helping her in the Library while Arjun smiles and goes his way.

Meanwhile, Anjali apologises to Rishabh for Arjun being late and out of reach.

Rishabh is not happy at his time being wasted and gives her a lecture about the importance of time.

Meanwhile, Shrishti is preparing for tomorrow's party when Sameer offers his team's help.

At the school, Preeta’s car breaks down and Arjun offers her the lift.

Inside the car, Kavya's teacher flirts with Arjun and he flirts back.