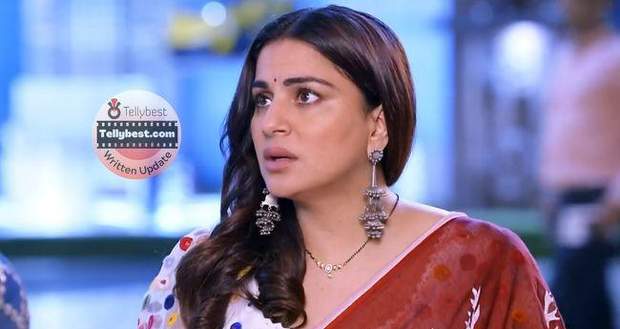 Today's Kundali Bhagya 22nd December 2022 episode starts with Preeta holding onto Arjun’s arm in fear as the flight takes off for New Zealand.

Arjun looks at the fingers digging into his skin and then stares at Preeta’s fear-stricken face which looks enchanting to him.

Realizing that she is grabbing onto another passenger’s arm Preeta looks up at Arjun and the two get lost in each other as they continuously stare into each other’s eyes.

Elsewhere on the flight, a newlywed is very excited about their trip to New Zealand.

Preeta changes her seat while the terrorist stands up from his seat, signaling his partner and the two of them go toward the steward’s cabin.

Inside the cabin, both of them ask for refreshments while the air hostess asks them to return to their seats, however, they create a mess and a dispute after which the air hostess leaves to call for cleaning help.

In the meantime, the terrorists load their guns and the hostess comes back to get shocked seeing the men with guns.

One of them captures the hostess and threatens her to kill telling her that they are the terrorists.

Meanwhile, Preeta feeds Kavya who excuses herself to go to the washroom but goes to see Arjun, telling him that she has recognized him behind his fake beard.

Arjun and Kavya share a sweet moment and she returns back to Preeta.

Rakhi & Karina laugh when Kavya feels offended like Karan as Shrishti mingles with a little girl who is traveling alone on the flight.

Arjun is listening to the conversation from a distance and feels drawn to Preeta.

Standing up he goes to Preeta with his eyes staring at her in longing while Preeta gets surprised to see him along with others as he removes his fake beard and hair.

Holding Preeta’s hand in his, he makes Preeta stand up who looks at him baffled.

Arjun slowly brings her hand close to his lips and plants a soft tantalizing kiss on the back of her palm while the words flow through his mouth.

He tells Preeta that he loves her so much, but despite his, all try to not think about her, he always ends up losing himself deep into her.

The dream ends and Arjun comes back to reality, feeling weird about his thoughts and feelings.

On the other hand, Rishabh and Sameer drive to Arjun’s house where Anjali opens the door for them.

Rishabh asks for Arjun but Anjali lies that Arjun has gone out and will come late at home.

Not buying Anjali’s lies, Rishabh offers to wait but confronts her for her lies when keeps on insisting to leave.

Meanwhile, the terrorists are looking for more bullets that they have brought in the food packs.

They keep on bantering with each other as one of them is overly chatty with the air hostess.

At the same time, Karina starts hiccupping and Preeta looks for the water bottle which is empty.

Rakhi tells that Bani must be missing her and explains the logic behind it.

Preeta stands up to bring water for Karina as the hiccups do not stop and no flight attendant can be seen.

Entering inside the cabin, Preeta gets taken aback by the scene in front of her.

The terrorists also get surprised and instantly one of them captures Preeta by placing a knife over her throat.

Preeta looks terrified and the terrorists decide to announce their presence to all the people on the flight.

© Copyright tellybest.com, 2022, 2023. All Rights Reserved. Unauthorized use and/or duplication of any material from tellybest.com without written permission is strictly prohibited.
Cached Saved on: Wednesday 25th of January 2023 11:50:10 AMCached Disp on: Sunday 5th of February 2023 03:11:00 AM