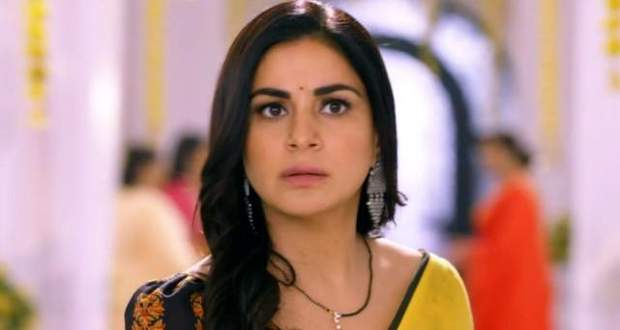 Rakhi apologises to the Pandit while Pandit Ji tells them that Karan is alive and if he is not with them then he is somewhere else.

He tells Rakhi that he is not just any Pandit but has divine powers with which he has seen Karan marrying Preeta.

He also shows Karan’s bracelet to them and tells them that he has used the personal items of a person which tells him whether the person is alive or not.

Later, Panditji assures Rakhi that Karan will definitely come back to him soon.

Elsewhere, the nurse calls the doctor to check on Arjun who is destabilising again.

In the meantime, Rishabh comes to Preeta and tells her to not believe in Pandit Ji and consoles her.

However, Preeta tells Rishabh that she wishes that Pandit Ji is telling the truth.

At the same time, Arjun wakes up with a shout and calls Preeta’s name.

Anjali, who has arrived at the hospital, is puzzled to hear about Preeta’s name from Arjun.

At the hospital, doctors are trying to analyse Arjun’s mental condition when Arjun recovers consciousness and is shocked to see his face changed in the mirror.

He panics and asks the doctors what have they done to him.

Arjun leaves the room while Anjali runs after him calling him Arjun.

Arjun gets angry and tells Anjali that he is not Arjun but Karan Luthra.

After a while, he asks Anjali what she knows about him.

Anjali calls Nidhi who is shocked to see Arjun.

Arjun angrily asks Nidhi to tell him what has happened to him because he remembers everything now.

Nidhi explains to him how she found him in the lake and took him to the hospital. She also tells him that his face was badly damaged by crocodiles and she gave him a new face.

However, he lost his memory when he regained consciousness and she gave him a new identity fearing he might have a nervous breakdown if he did not remember anything.

Karan tells Nidhi that she has wronged him by not going to the authorities as someone would have filed a missing report for him.

Nidhi is saddened to hear Arjun’s accusation while Anjali asks Karan whether he remembers them or not.