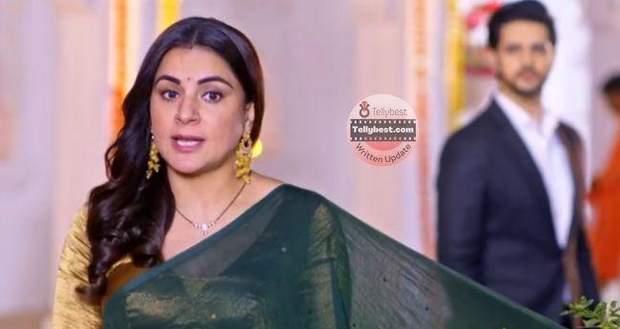 Today's Kundali Bhagya 22nd November 2022 episode starts with Preeta asking Rishabh if everything is alright while Rakhi also asks him the same.

Rishabh questions them for asking the same question.

Meanwhile, Preeta tells him that today was a weird day with a lot of inauspicious things happening one after another.

Rishabh feels overwhelmed by their love and tells them that nothing can happen to him as long as their love is with him.

Meanwhile, Rakhi thanks God for Rishabh’s safe return and tells Preeta to get the ingredients from the market tomorrow before the veneration.

Later, Rishabh tells Preeta that she has made this house a home for everyone in the family and that no one else can do for him.

Preeta notices marks on Rishabh’s neck but remembers the ingredient list for veneration and goes to Rakhi.

Meanwhile, Rishabh settles on the couch and wonders what went wrong with Anjali tonight.

Later, Preeta returns with a list and covers Rishabh with a blanket while he slept.

The next morning, Arjun arrives at the market and thinks about Preeta and shrugs her thoughts.

He prays to God to not let him meet Preeta here as now he gets angry to see her after she has filed a complaint against him.

Just then he spots Preeta in his rearview mirror.

Preeta looks beautiful in a red Saari while talking to the vendor.

Arjun turns around fighting his feelings of love with anger for Preeta but once again follows her as she collects things from different stalls.

Later, Preeta is crossing the road with her wallet in hand when two thieves accost her and snatches her wallet and run away.

Arjun questions a harassed Preeta and runs after the thieves after finding out the problem.

Later, Arjun punches the thieves with aggression while questioning him for touching his wife.

Preeta gets shocked to hear Arjun call her his wife while Arjun continues to pummel the thief.

Meanwhile, Kareena asks Rishabh about his well-being as he comes down.

Rishabh assures her that he is absolutely fine and jokes about being made of steel.

Later, Kareena tells Mahesh and Rishabh to get ready for veneration while Rishabh asks her about Preeta.

Rakhi tells him that Preeta has gone to the market to get the veneration's ingredients and will be coming home soon.

Meanwhile, Kareena asks Pandit Ji about having a look at Kritika’s Kundali who has been acting weird lately.

At the Market, Preeta confronts Arjun for calling her his wife while Arjun tells her that she is his wife.

Preeta looks aghast at Arjun while Arjun recalls his situation and apologises to her saying he meant to say his friend's wife.

© Copyright tellybest.com, 2022, 2023. All Rights Reserved. Unauthorized use and/or duplication of any material from tellybest.com without written permission is strictly prohibited.
Cached Saved on: Monday 21st of November 2022 11:14:03 PMCached Disp on: Wednesday 7th of December 2022 04:45:45 PM