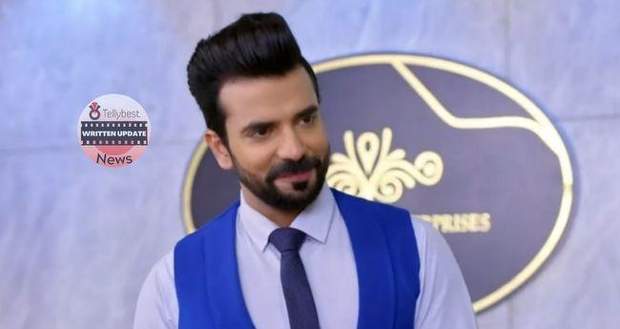 Today's Kundali Bhagya 22nd September 2022 episode starts with Shrishti remembering that she has to go to her mother's place to get pastries for the party.

Sameer does not like being ignored by Shristi while Mahesh praises Shrishti and asks Sameer to value her.

Meanwhile, Arjun is making small talk with Preeta when she realises that Arjun is driving very fast.

Just then Anjali calls Arjun while Arjun ignores the call.

Meanwhile, Anjali does not like Arjun’s embarrassing her in front of Rishabh and calls Arjun again.

Preeta is scared of Arjun’s fast driving and tells Arjun to drive slowly.

Just then Preeta tells Arjun to stop the car so that she can visit the temple.

Arjun watches Preeta going to the temple and is about to follow her when Anjali calls again.

Arjun picks up the call and lies to her about being at the business plaza.

Later, Rishabh gets Anjali's call telling him that Arjun is busy at the meeting at the business Plaza.

Meanwhile, Rishabh arrives at the same temple whereas Arjun also climbs the stairs and wonders why he can't see love for Rishabh in Preeta’s eyes.

Arjun is at the temple watching Preeta while Rishabh gets distracted by an old lady and helps her from falling down.

Arjun prays for Preeta to get whatever she wants while Preeta prays for Karan’s happiness wherever he is.

Just then Preeta’s Sari catches fire while Arjun helps Preeta from burning and scolds her for being negligent.

Afterwards, Rishabh reaches the Pandit and tells him to pray for Karan and his happiness.

Later, Preeta watches Arjun and wonders about the complicated nature he possesses.

Meanwhile, Shrishti is talking about party planning while Biji asks her why is she taking so much interest in it.

On being asked, Shrishti shares her plan to open an event management industry.

After a while, Shrishti refuses to receive Sameer’s call because she is angry and tells her that Sameer will come to her to help her.

Afterwards, Shrishti gives attitude to Sameer while Sameer tells her that he will meet her at home.

In the meantime, Prithvi is locked at the police station and tells the police that he is innocent and Arjun Suryavanshi has framed him.

The police officer tells him that this is what all criminals say.

Later, Prithvi request to make a call while his inmate tells the police that it is Prithvi’s right.

Arjun asks Preeta to thank her for saving her life.

Preeta tells him that she doesn’t feel like thanking him but Arjun tells her to try and use her words.

Arjun calls Preeta "Kadwi Kareli" as she walks away without thanking him.

© Copyright tellybest.com, 2020, 2021. All Rights Reserved. Unauthorized use and/or duplication of any material from tellybest.com without written permission is strictly prohibited.
Cached Saved on: Friday 30th of September 2022 11:18:09 PMCached Disp on: Saturday 1st of October 2022 05:34:20 PM