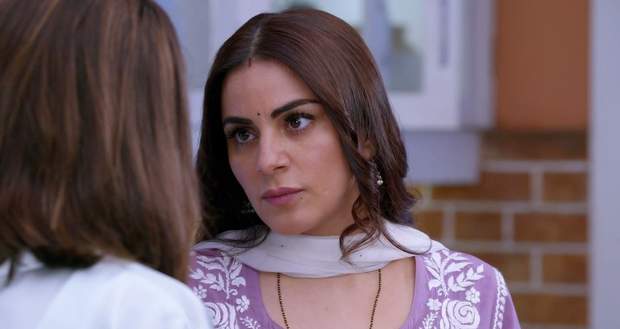 Today's Kundali Bhagya 23 March 2021 episode starts with Preeta accidentally attacking Karan with a knife. Karan gets scared and further thanks Preeta for helping his family.

They share some romantic while Mahira comes there. Karan sees her and leaves the kitchen asking Preeta to come soon in the room.

Mahira confronts Preeta about gaining Karan’s trust while Preeta doesn’t care about her plans. She is sure about her relationship with Karan.

They continue to argue while Mahira is adamant to take revenge on Preeta. Further, Mahira learns that she has put chili in Prithvi’s eyes.

Mahira tells her that she has just three days and after that, she will lose Karan. Meanwhile, Sherlyn decides to kill Mahesh and is about to put the injection in his drip when Chachi comes out of the washroom.

She overhears everything and stops Sherlyn. Rakhi comes there and Chachi tells her about Sherlyn’s plan of killing Mahesh.

Prithvi goes to meet Kritika but she asks him to leave. Further, Akshay calls Kritika and again blackmails her.

Prithvi witnesses this and later learns from Kritika’s phone that Akshay is blackmailing her. Prithvi deletes the messages while Kritika returns and gets suspicious to see her phone on.

Pammi tries to tell Rakhi the truth while Rakhi gets shocked to learn this and confronts Sherlyn. Sherlyn manipulates the situation while Sirish thinks Pammi misunderstood the situation.

Sirish calls someone to get help. Elsewhere, Mahira makes Daadi slip because of a lotion so that Preeta gets busy taking care of her and is not able to go to Karan.