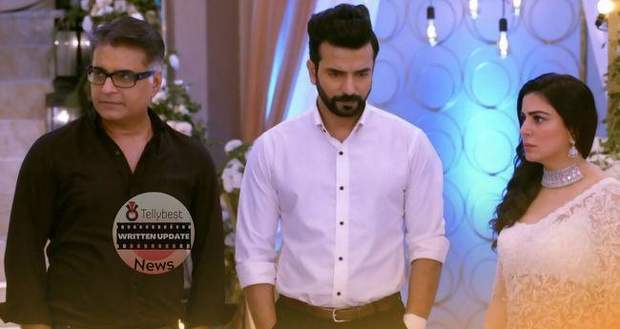 Today's Kundali Bhagya 23rd August 2022 episode starts with Karan going to investigate the voice when a constable interrupts him and saves Prithvi from being found out.

In the meantime, Preeta is recalling Kareena’s comparison of Arjun and Karan and gets swallowed in their memories having similar feelings.

Her inner self asks her why is she hiding her feeling for Arjun.

Preeta tells herself that Karan and Arjun are not the same as no one can be like Karan and she only loves Karan.

Her inner self emphasises her having feelings for Arjun while Preeta denies it with vehemence and throws a vase in the mirror.

Meanwhile, Prithvi comes out of the police station while Anjali sees him.

Prithvi looks confused with all the information that he has been bombarded with.

After a while, Rishabh brings hot chocolate for Preeta and tells her that her mood will instantly get better.

However, Preeta looks at Rishabh and recalls her dance with Arjun.

Meanwhile, Arjun comes out of the police station and tells Anjali to get the goons out of the jail without taking his name as he had made a deal with the goons.

On the other hand, Prithvi comes home and tells Sherlyn about Arjun and his dealings with the goons.

He also tells Sherlyn that Arjun has different has two sides one he shows and the other he hides.

Meanwhile, Rishabh is making the bed to help Preeta while Preeta contemplates the difference between Rishabh and Karan and rationalises being Rishabh's wife.

At home, Arjun recalls his proposal to Preeta and berates himself for losing control.

He prays to God to only remind him that Preeta is his enemy who has killed him.

Anjali overhears Arjun and becomes worried for Nidhi and Arjun both.

Anjali is wondering if Karan and Preeta are still enjoined with each other and if yes then he cannot imagine what Nidhi will do to him.

In the meantime, Prithvi tricks Arjun’s employee to enter Arjun’s office and decides to investigate him in his absence.

As Prithvi is combing through Arjun’s file, Arjun's car arrives at the office and goes in and his manager informs him about Prithvi.

Meanwhile, Sherlyn calls Prithvi and tells him to get out of there else he will land in bigger trouble.