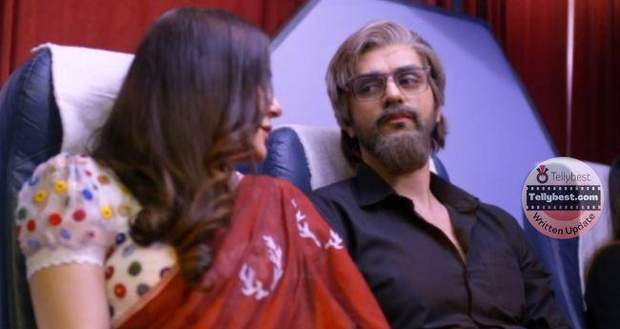 Today's Kundali Bhagya 23rd December 2022 episode starts with Shristi asking Rakhi if Kareena has someone whom she likes which shocks Rakhi.

Shristi stares at Kareena sleeping and says that there are many impolite people like her while pointing at a scary man.

Arjun spots a person asking Kavya about Preeta and asks him why he is inquiring about Kavya’s mother.

As the man asks Arjun why he is asking him such a question, the terrorists appear from behind the curtains with Preeta at the point of their knives.

Arjun and others get stunned to see Preeta taken hostage by the terrorists and ask them to leave her.

Rakhi joins her hands and requests the terrorists to leave Preeta as they have nothing to do with their hijack.

Arjun announces that they should take Kavya and the other children away from there as the environment is not good for them.

However, Kavya says she will not go anywhere because she is not scared of the terrorists.

Arjun asks Preeta what cartoon Kavya watches which has made her so fearless. Hearing that, Rakhi asks Arjun to question the terrorists instead of Preeta.

A woman joins Rakhi and asks the terrorists to leave Preeta so they can play antakshari together.

The terrorists ask everyone to stop talking and say that Preeta will help them reach the cockpit so that they can talk to the authorities.

As the terrorists take Preeta and an air hostess away, Kavya asks the family members to take action against the terrorists as they are few in number.

Kavya says that they can throw the terrorists out of the window to which Shristi replies that the windows in the plane do not open.

Arjun asks Shristi to take Kavya and others away so that they can be safe.

The terrorists enter the cockpit and quickly ask the captain to contact the authorities.

The terrorists demand to release the three terrorists that the government had caught on Republic Day if they want all the passengers safe.

On the terrorists’ demand, the captain turns the plane’s direction towards the neighboring country of India.

Meanwhile, Rishabh and Sameer ask Anjali where Arjun is and conclude that he is not at home and they were lied to.

Anjali says that the Luthras did wrong by handing a restraining order to Arjun when he had done nothing.

Rishabh replies to Anjali saying that it is he who had been framed falsely and still did not take any steps against them.

Rishabh gives Anjali a warning that when the Luthras will cross their boundary of patience, it will be over for them.

Back at the plane, the terrorists come back from the cockpit and Preeta demands to go to Kavya.

The terrorists push Preeta as she tries to get free and Shristi enters that section at that moment.

As Shristi catches Preeta, Arjun handles the terrorists from attacking the ladies.

While fighting with them, Arjun’s fake beard comes off and everyone gets shocked to discover that it is Arjun in disguise.

Arjun gets hit on his head by one of the terrorists and struggles to stand while the others continue to hit him.

As Preeta asks the terrorists to stop hitting Arjun, one of them asks Preeta to stop defending her husband.

Preeta tells the terrorists that Arjun is not her husband with all the family members agreeing with her.