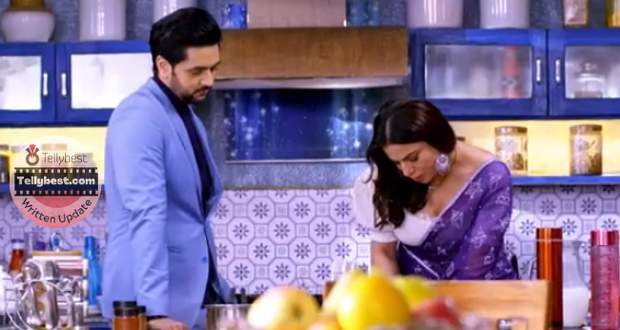 Today's Kundali Bhagya 23rd January 2023 episode starts with Arjun telling the Luthras that as per his seven days challenge, he has now overtaken this house by owning 51 per cent of the shares.

Rishabh is shocked and tells him that it cannot be possible as Mirror companies have shares equivalent to them and he only holds a 2 per cent.

However, Arjun and Anjali tell them that the other company is their partner and that is how they hold 51 per cent of the shares.

Mahesh tells him to leave while Rishabh asks Arjun to show the papers.

Arjun tells them that there is also news on the television about the takeover and he is only here to forewarn them.

Meanwhile, Kareena takes Rakhi inside and tells Rakhi that Arjun has come to take over the house, the same Arjun that she was hoping and rooting for to be Karan.

However, Rakhi tells her that Arjun is only informing them about the takeover but not taking the house from them.

Kareena tells her to come back to her senses and stop believing Arjun to be Karan.

Rakhi is still convinced that Arjun is Karan and will not tell him to leave the house.

Rakhi again emphasises Karan being Arjun and accuses them of going mad because they cannot see Karan in Arjun.

Kareena gets offended and tells her that there is no competition going on there that would make them want to take a stand against her.

Kareena says that she can understand her mental and emotional state but she needs to grasp the truth that Arjun is Arjun and not Karan.

Rakhi tells her to leave her with her belief and not bind her in her reality.

Seeing Rakhi leave, Kareena feels helpless to save Rakhi from going into depression.

Meanwhile, Shrishti asks Arjun what he wants and why can he not make up his mind.

She asks him if he wants to be friends with them or wants to take them on roads by taking over Luthra Industry.

Sameer also comes forward saying that he sees a brother in him when he looks at him but the brother does not give pain to his own brother.

Arjun looks aggrieved, as if he wants to say something but remains quiet.

Preeta also asks Arjun if he really wants to take the house that this family treat like a temple and that has millions of memories of their life here.

Arjun tells her in a weak voice that it is not the case and it is just business.

Just then Kavya comes back from school and becomes happy to see Arjun.

In her zeal to hug him, she splashes juice on his coat which Arjun ignores and tells Kavya that he cannot be angry at her.

Later, Arjun goes to clean the juice while Dadi takes Kavya inside, and Rishabh and Sameer go to the study to check the papers.

Meanwhile, Rakhi follows Arjun to his room and confirms his suspicion that only a family member can walk so confidently in his house knowing full well where to go and what to search for.

In the meantime, Arjun is looking at his room and admiring everything that belongs to him and the memory associated with it.

Later, Anjali asks Preeta how her Sardar friend is who accompanied her to her home in the morning.

After a while, Anjali tells Shrishti that she knows all about her including the fake IT raid that they committed at their house and all those things too that she does not know.

Just then the doorbell rings and Preeta collects the report of Arjun’s fingerprints and handwriting.

Seeing the reports, the earth moves under Preeta’s feet as the reports say Arjun is a perfect match to Karan.

She runs to tell Rakhi about it and tells Shrishti on the way that Arjun is Karan.

However, Shrishti refuses to believe him to be Karan who can never do this to his family.

Meanwhile, Rakhi tells Dadi to believe her as Arjun is Karan but Dadi stops her telling her that her constant repetition is worrying everyone including her who has not slept properly since Karan’s death.

Rakhi cries to hear the disbelief in Dadi’s words but is assured that very soon she will find the truth herself that Arjun is Karan.

© Copyright tellybest.com, 2022, 2023. All Rights Reserved. Unauthorized use and/or duplication of any material from tellybest.com without written permission is strictly prohibited.
Cached Saved on: Wednesday 25th of January 2023 09:17:08 AMCached Disp on: Sunday 5th of February 2023 04:14:15 AM