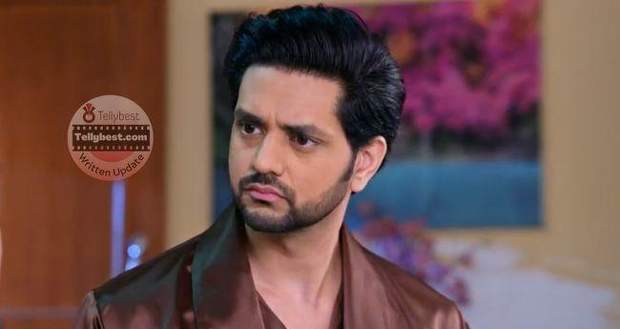 Today's Kundali Bhagya 23rd November 2022 episode starts with Shrishti asking Sameer to not go to office as there is veneration in the house.

Sameer tells her that he will have to go as Rishabh is not going.

However, Shrishti becomes upset at Sameer’s refusal and tells him to go while Sameer decides to stay home to make up with Shrishti.

Arjun follows Preeta while telling her that it was a mistake to not say friend’s wife.

However, Preeta tells him that he forgot the most important part.

After a while, Arjun tells her that she should not have fought for a mere purse while Preeta tells him that this purse is very important to her more than anything in life and cannot let it go.

Afterwards, Preeta refuses Arjun’s offer of a lift and tells him to stay away from her and her family as she has not forgotten what he has done in the past.

Later, Arjun smirks thinking that very soon he will bring her and Kavya both home.

Meanwhile, Snigdha comes to Anjali’s room and calls Arjun to ask him about Anjali.

However, hearing Arjun’s voice Snigdha forgets about Anjali and flirts with him.

Elsewhere, Preeta comes back and hands over the veneration ingredients to Pandit Ji.

Just then Girish comes crying to Rakhi about Rishabh who is not letting him do anything.

Preeta goes to Rishabh and finds him looking dismal seeing so many dress choices and finding none.

Preeta laughs at his misery and selects a dress for him.

Rishabh feels grateful for selecting his dress and tells her only she can find the right dress.

Later, Kavya also approves of Kurta and tells him to get ready fast.

Elsewhere, Arjun comes back with Dadi’s medicine and finds Shekhar sitting there.

To Arjun’s surprise look, Shekhar tells him that he is only here to take care of the confusion that yesterday’s debacle has caused.

Arjun looks shocked to hear the heated conversation between Anjali and Rishabh while Shekhar tells him that Rishabh has threatened Anjali and looks like he means it.

Afterwards, Snigdha asks her Dadi why Arjun loves Preeta despite her being married.

In the meantime, Shrishti complains to Rakhi about Sameer being lazy.

Later, Kareena asks Shrishti about Holy sweets when Kritika comes to them and tells Kareena that she is going out.

However, Kritika becomes sarcastic and tells Shrishti that this veneration is for couples.

Kareena scolds Kritika for pitying herself and tells her to stay till veneration and tells Shrishti to make Holy sweets.

After a while, Preeta comes looking for something in her room while Rishabh tries to gain her attention.

Preeta tells him that he is looking good and asks him to come down quickly.

Rakhi becomes worried thinking it to be a signal of something bad.

© Copyright tellybest.com, 2022, 2023. All Rights Reserved. Unauthorized use and/or duplication of any material from tellybest.com without written permission is strictly prohibited.
Cached Saved on: Wednesday 23rd of November 2022 11:19:39 PMCached Disp on: Saturday 10th of December 2022 03:12:15 PM