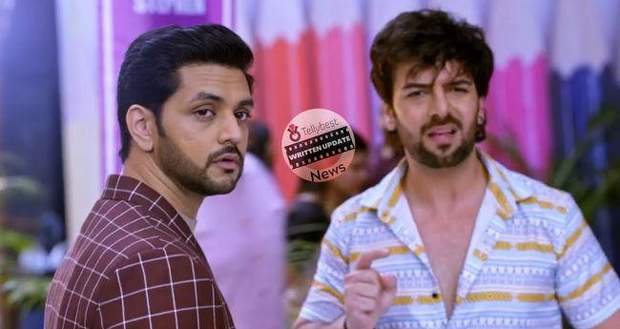 Today's Kundali Bhagya 23rd September 2022 episode starts with Preeta hears Arjun calling her Kadvi Kareili and asking him if he said anything to her.

Arjun denies saying anything to her and tells her that it is her who has to say thank you to him.

Preeta invites him inside saying a cup of tea will serve as her gratitude but Arjun makes an excuse and leaves.

Meanwhile, Biji is happy to see Preeta while Preeta teases Shrishti saying everyone loves her more.

Shrishti gets worried to see Preeta’s burnt Sari and Preeta is about to tell them when the door is knocked.

Preeta is surprised to see Arjun at Biji’s door and asks him for coming back when he tells her that he has something to say.

Preeta tells him to go ahead and say it but Arjun sets Preeta aside and goes to meet Biji.

Biji is happy to see him and asks Preeta to make tea for everyone.

Meanwhile, Prithvi asks his inmate why is he helping him.

However, his inmate tells him that he remembers him from somewhere but cannot exactly recall where.

Prithvi calls himself innocent and tells him that he has never met a lawyer like him.

Just then he sees Sherlyn at the police station and introduces her to his inmate.

However, Sherlyn turns his hand around for putting his phone in the ladies washroom.

Prithvi tells her that Arjun has framed him but Sherlyn refuses to believe him and tells him to rot in jail for the disgusting task he has committed.

Prithvi is shocked at Sherlyn’s attitude and complains to his inmate about landing bad luck when he got married to her.

His inmate who was listening to Sherlyn babbling about Prithvi’s love interest in Preeta recognises her name and asks Prithvi if she is the same Preeta who got married to Rishabh Luthra.

Meanwhile, Arjun complains to Biji about Preeta not thanking him for saving her from the fire and for dropping her here.

Biji shames Preeta for being ungrateful to Arjun.

Just then Sameer also comes to the Biji’s house and is surprised to see Arjun comfortably sitting beside Shrishti.

After a while, Arjun collides with the door and gets hurt and Preeta puts an ice pack on his head when Arjun remembers past memories and recalls her betrayal and goes away all of sudden.

Sameer and Shrishti are also surprised at Arjun’s sudden departure while Preeta thinks his behaviour odd.

Later, Arjun is again reliving his past and present and becomes worried and calls his heart his enemy for being attracted to Preeta.

He vows to keep his heart in check in the future and thinks of staying away from Preeta as much as possible and focusing on his revenge.

© Copyright tellybest.com, 2020, 2021. All Rights Reserved. Unauthorized use and/or duplication of any material from tellybest.com without written permission is strictly prohibited.
Cached Saved on: Saturday 1st of October 2022 10:55:15 PMCached Disp on: Thursday 6th of October 2022 04:17:47 PM