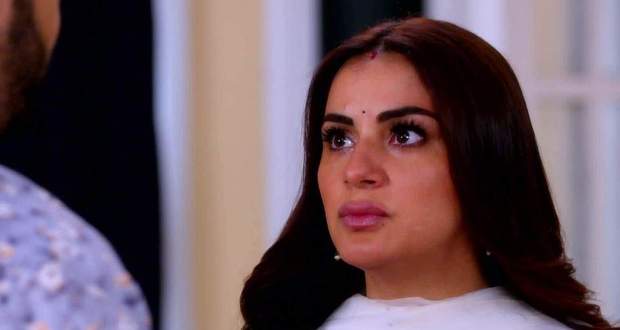 Today's Kundali Bhagya 24 March 2021 episode starts with Prithvi reaching the hotel to meet Akshay. He enters his room and starts beating him for blackmailing his wife.

He asks about the amount he wants and offers to give even more money. He then asks him to leak Kritika’s images online.

Meanwhile, Mahira falls on Karan in the kitchen on purpose while Karan is searching for Preeta. Mahira lies that Preeta is with Prithvi.

Karan shows her trust in Preeta and says his wife is very smart and can handle anyone. Preeta comes there and tells Karan about Daadi getting injured.

Karan and Preeta share a romantic moment while Mahira is adamant to break Karan’s trust in Preeta.

She leaves from there while Karan asks Preeta to meet him outside the next day to spend some alone quality time.

Prithvi wants Akshay to scare Kritika so that she runs for help to him. He wants to become a hero in front of Kritika again.

Sirish asks someone to find out the contents of the injection that Sherlyn was going to put in Mahesh’s drip. He wants to know the real villain of the house.

Prithvi had planned to get Akshay in his team along with Sherlyn. Later, Prithvi goes to meet Kritika and apologizes to her.

He expects her to tell him the truth about Akshay but she stays quiet. Prithvi asks Akshay to threaten Kritika even more.

Akshay follows his orders and threatens to spoil Kritika and Karan’s image in front of everyone. Kritika gets scared and takes jewelry from her cupboard.

A piece of jewelry falls down while she is leaving the room and Preeta gets suspicious to notice this.

© Copyright tellybest.com, 2020, 2021. All Rights Reserved. Unauthorized use and/or duplication of any material from tellybest.com without written permission is strictly prohibited.
Cached Saved on: Wednesday 8th of December 2021 12:38:57 AM