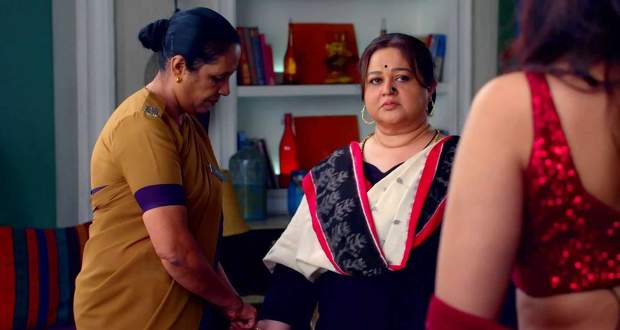 Karan also thinks Sherlyn is wrong and accuses her of lying about pregnancy. Mahira wants Rishabh to behave properly with Sherlyn.

Rishabh asks Sherlyn to take care of her and her child while Sherlyn does drama of being hurt. Dadi also sides Preeta and Sarla while Sherlyn starts crying.

Mahira is worried about the plan while Sherlyn thinks their plan will succeed. Meanwhile, Srishti comes to meet Preeta and reveals she didn’t tell Sarla that she is there.

Sameer reveals that Preeta had consumed poison while Srishti thinks it is done by Mahira and Sherlyn.

Mahira further tries to instigate Dadi and Kareena against Preeta and Sarla. Kritika comes at the same time and reveals she is not able to find Sherlyn.

Sherlyn arrives at Sarla’s house with the police and asks the police to arrest Sarla. Sherlyn accuses Sarla of giving poisonous Laddoos to her.

The police ask Sarla to come along and she further orders the constable to arrest Sarla. Janki is not able to contact Preeta.

Preeta refuses to eat anything and wants to talk to Sarla. She further says she wants to strengthen her relationship with Karan by keeping the fast.