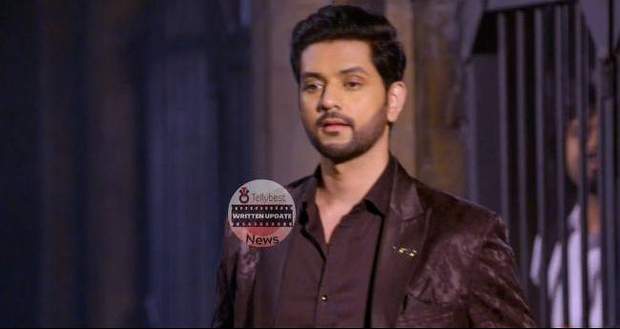 However, Prithvi tells him that he knows about his connection with Raja which surprises Arjun and he asks his guard to leave him.

In the meantime, Preeta tells Girish that she will take Rishabh’s tiffin to his office.

Meanwhile, Girish gives Preeta Arjun’s handkerchief and asks her to give it back to him as his office is near Rishabh’s.

In the meantime, Prithvi tells Arjun that he is aware that Arjun is not a real friend to Rishabh and asks him why is he so much against Rishabh that he wants him killed.

Prithvi also tells Arjun that he has to even score with Luthras and would love to join hands with him.

Prithvi boasts about Karan’s death for taking away Preeta from him.

Hearing Prithvi abuse Preeta makes Arjun so angry that he slaps him hard and tells him to not take Preeta’s name in front of him.

Prithvi misunderstands Arjun’s anger toward Preeta and praises him for his passion and offers to be partners in making Luthras miserable.

However, Arjun refuses his offer and tells him to go when Rishabh arrives and asks to have a professional talk with Arjun.

Arjun takes Rishabh to the conference room while Prithvi follows them there as well to eavesdrop on their conversation.

In the meantime, Preeta smells of Arjun’s handkerchief and thinks of her moments with Karan.

Meanwhile, Rishabh is angry with Arjun and tells him that he has betrayed him after becoming his friend.

Arjun gets scared of being exposed but sighs with relief knowing Rishabh is talking about a business deal.

Arjun apologises to Rishabh and tells him that Anjali might have pitched for that project as that is their area of expertise.

Arjun offers to take back the deal but Rishabh asks him to become a partner instead.

Later, Prithvi brings water for Rishabh dressed as a peon while Arjun looks at the scene with bated breath.

Afterwards, Arjun decides to betray Rishabh in business just the way he had betrayed him in life.

Arjun tells Rishabh that they have become so close all because of Preeta.

Meanwhile, Prithvi is astonished to hear that Rishabh has offered a partnership to Arjun.

Prithvi praises Arjun for achieving the impossible with Rishabh who has never accepted anyone’s partnership offer in the past.

Unaware that he is talking to Karan, Prithvi vents his hatred for Luthra family members and tells him to pressurise the Luthras to an extent that they become beggars, especially Preeta.