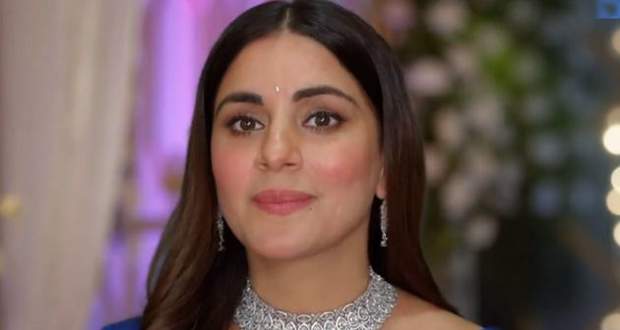 Today's Kundali Bhagya 24 January 2022 episode starts with Preeta and Janki having a conversation in the corridor.

Janki forewarns Preeta of the threats that she senses in Luthra House.

Preeta assures Janki. She says that she has changed, her standards and ideologies have changed.

Janki feels empowered after talking to Preeta. She tells Preeta that she will always be there in times of need.

Meanwhile, Natasha stops Prithvi and Sherlyn from going to the party.

Natasha calms down the raging beast inside Prithvi by telling him that she has a plan to get their revenge on Preeta.

Sherlyn doesn’t have faith in Natasha’s plan but still lets Natasha do as she wishes.

While the party goes in full swing, Sameer asks Karan for help to patch up with Shrishti who is not ready to let go of the fight that happened two years ago.

Karan advises Sameer to keep nagging Shrishti with his sorry’s and I love u’s and eventually, she will come around.

On the other hand, Preeta comes across Prithvi as she is making her way to the party.

Prithvi sarcastically congratulates Preeta for her success in escaping the death itself.

Preeta mocks Prithvi for his failed attempt of attack to kill her.

Preeta warns Prithvi to be careful as she calls herself a fireball that can burn Prithvi into ashes.

Agitated, Prithvi challenges Preeta to do something to prove her words.

Preeta flaunts that she has everything planned for Prithvi.

In a slip of tongue, Preeta also mentions that one day she will make Prithvi apologize to every member of the Luthra family.

As Preeta starts to leave, Prithvi calls her out for her slip of the tongue.

Preeta becomes nervous for a moment but composes herself almost instantly.

Prithvi waits for Preeta to answer and Preeta, very cunningly, manipulates Prithvi with her words.