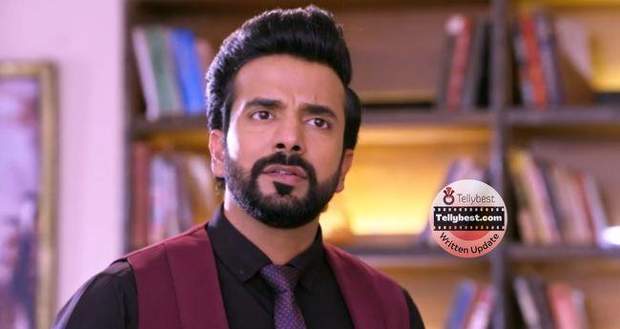 Today's Kundali Bhagya 24th January 2023 episode starts with Rishabh talking on the phone with someone to find a law to counterfeit Arjun’s claim on the house when Anjali comes there.

Seeing Anjali and hearing a negative answer on the phone, Rishabh throws his phone on the wall.

Arjun also joins them while Rishabh tells him that he has never seen a more despicable man than him.

Arjun asks Anjali if what he is doing is really right or not because he does not feel right.

Anjali assures him that he is on the right track and tells him to hang tight and not get emotional.

Afterwards, Arjun tells Rishabh to check the file but Rishabh angrily tells Arjun to get out of his sight.

Sameer tells Arjun that he evokes anger in cool and composed Rishabh and requests him to leave.

Rishabh shouts at Arjun and tells him that he is the first person on the planet that he wants to hate but cannot because he does not have the hate button in him.

Just then, Anjali tells Rishabh that their lawyers will join them soon and they have seven days to pack whatever they want.

Arjun looks surprised at Anjali’s announcement while Anjali drags him out of the room.

Meanwhile, Preeta comes to Rakhi and tells her that Arjun is Karan as both his handwriting and fingerprint match Karan’s.

Rakhi feels elated at the news while Kareena comes there to rain on their happiness telling them that Karan can never ask them to leave the house.

Both Preeta and Rakhi look shocked at the news.

Meanwhile, Anjali is relieved that Arjun’s identity is hidden and Arjun is not returning to his family.

Arjun asks Anjali why did she tell the Luthras that they will have to leave the house in seven days.

Anjali tells him that she has only said this so that they do not suspect him.

In the meantime, Rakhi tells Kareena that it was not Arjun but Anjali who has asked them to leave the house and that Arjun is her Karan.

In the meantime, Arjun tells Anjali that he cannot ask his family to leave the house no matter what they think.

Anjali tries to manipulate him and reminds him of what Preeta and Rishabh have done to him.

Elsewhere, Rakhi tells Kareena to believe her as there can be several reasons why he is hiding his identity from them.

Meanwhile, Anjali comes to call Preeta and tells Rakhi later that she knows Arjun for the last ten years.

Later, Preeta accepts Arjun’s offer of marriage which shocks everyone including Rishabh.

Arjun tells her that he will go right away and find the most auspicious time for the wedding.

Meanwhile, Dadi tells Preeta to not sacrifice herself for them.

In the meantime, Rakhi tells Shrishti that Preeta is marrying Arjun after all and shows her the video of Arjun trying on Karan’s clothes.

Later, Anjali questions Arjun for proposing to Preeta while Arjun tells her that he cannot take away this house from his parents and also feels that Preeta had not killed him but he had some misunderstanding.

Anjali is shocked and tells him that he is giving all these rubbish explanations because he wants to ruin his brother's house.

However, Arjun tells her that he has recently found out that Preeta and Rishabh do not have any marital relationship and are living as friends.

Meanwhile, Rishabh questions Preeta for agreeing to marry Arjun while Rakhi comes in and tells Rishabh that Preeta is doing the right thing as Arjun is Karan.

She reminds Rishabh about his relationship with Preeta and his vow that he was only looking after Karan’s possessions.