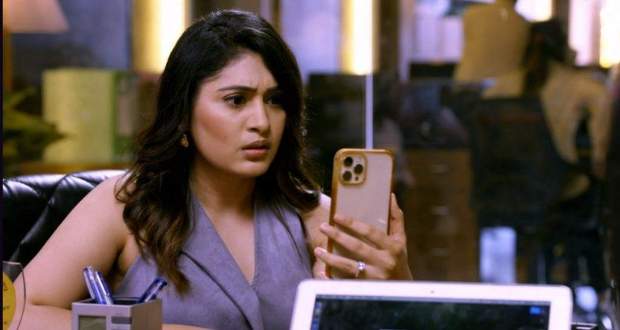 Today's Kundali Bhagya 24th June 2022 episode starts with Kareena telling Rakhi that Karan is not with us anymore.

Rakhi tells her that she can feel her around and that he was just here telling her to not get angry at Rishabh.

Kareena comforts her saying that Karan will always be with them in their memories.

Meanwhile, Preeta arrives at the school followed by Karan who was shocked to hear Preeta's child's name is Kavya.

Karan remembers in a flashback that he and Preeta have once decided to call their daughter Kavya.

Meanwhile, Preeta is saying goodbye to Kavya when another parent reminds her to meet the principal.

Rishabh called Preeta but she tells him that she is going to the Principal's office and will call him later.

Karan follows her inside, where the principal was telling Preeta about Kavya’s misbehaviour and asks her to make Rishabh talk to Kavya as she has heard accolades about his sorted attitude.

Preeta also praises Rishabh which makes Karan remember Preeta’s past praises and think himself a fool for not seeing the truth.

Preeta sees Karan and follows him out of curiosity but was distracted when she collides with a teacher.

Karan hides in the store room of a school while Preeta sensed something and comes inside as well.

Preeta feels Karan's presence around her but thinks of it as his soul.

Karan who is filled with hatred for Preeta curses her to be trapped in such dark places so that the darkness engulfs her life forever.

Later, Preeta is locked in the room and after shouting for help several times she gets worried and feels suffocated.

On the other hand, Anjali shouts at the hospital staff for not caring for Karan enough and not knowing about his leaving the hospital without being discharged.

In the meantime, Preeta realises she is not alone in the room and calls to the person.

After not getting a reply she gets worried and tells the person that if he tries to harm her then her whole family will rain down on him for harming her.

She starts to lose oxygen and coughs badly.