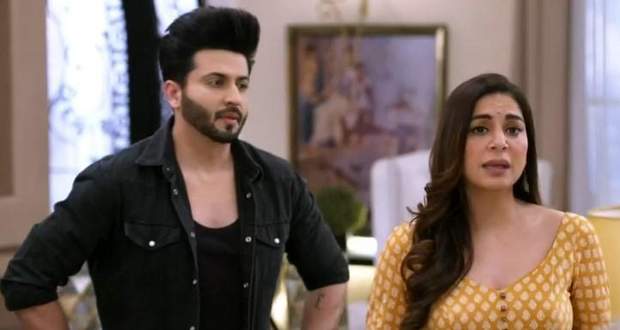 Natasha tells Sherlyn that she knows who has stolen the papers but does not have a confirmation about it.

In Kareena's room, Kareena tells Rakhi and Dadi about Karan stealing the papers.

Not believing Kareena for a second, Rakhi defends Karan however, Kareena is convinced.

At the same time, Karan comes into the room and tells Kareena that he hasn't stolen the papers.

Leaving in a hurry, Prithvi tells Nagre that he is coming while Karan spots him and follows him.

On meeting Prithvi, Nagre asks him about calling him there.

Prithvi tells Nagre about stealing Preeta's paper and asks him whether he can change them or not.

On getting Nagre's agreement, Prithvi tells Nagre about bringing the papers to him, the next day.

Hearing of Prithvi's plan, Karan makes a call to the police and asks him to come immediately.

At the dinner time, Kritika comments on Preeta’s joining them for dinner.

However, Shrishti could not bear Preeta's insults and replies in kind.

Afterwards, Shrishti loses her temper on Preeta's behalf and berates everyone for behaving so poorly with Preeeta.

Shrishti also reminds them about Prithvi's past behaviour while he was in charge.

Preeta tries to stop her while Shrishti goes on and on and is about to reveal Preeta’s truth but Preeta stops her in time.

Meanwhile, Prithvi walks in, to go to his room but Karan stops him midway and calls the cops inside to search Prithvi’s room.