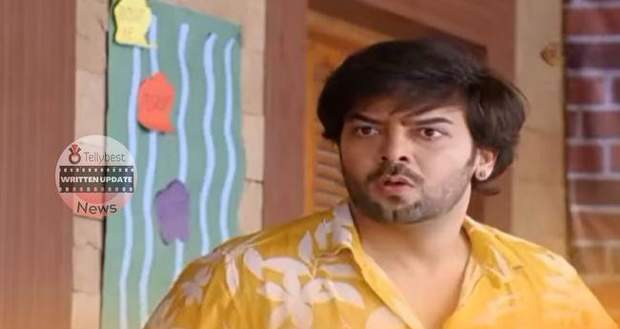 Today's Kundali Bhagya 24th October 2022 episode starts with the terrorist threatening Kavya but she tells them about Arjun who is her best friend and will beat them badly if he tries to hurt her.

Meanwhile, hearing some noise, the terrorist goes to check on them.

Meanwhile, the police infiltrate the school campus and confront the terrorist.

Suddenly they start to laugh and show them the bomb that they are carrying.

Wearing the masks, the terrorist activates the tear gas on the police.

Meanwhile, Preeta tries to mediate between Biji and Janki and tells her to finish the fight.

At the same time, Shrishti gets the notification about the news of Kavya’s school.

Preeta runs out reading the news while Shrishti goes after her after telling Biji about the attack.

Meanwhile, Arjun overhears the news about the attack on Kavya’s school on the radio and drives to her school.

Meanwhile, Rishabh is in the meeting when Rishabh’s phone starts to ring but he starts scolding the staff for not silencing the phone.

On being pointed out, Rishabh picks up the phone and gets shocked and leaves immediately.

In the meantime, Preeta and Shrishti come running down.

Preeta faints while trying to tell everyone while Shrishti tells everyone about the attack on Kavya’s school.

After a while, all the Luthras accompany Preeta to Kavya’s school.

Meanwhile, Raja and Vishnu are standing outside the school and expressing their disgust for using children for selfish reasons.

Vishnu and Raja are casually discussing Arjun’s betrayal when Arjun refuses to give him money because they have betrayed him.

Raja and Vishnu complain about having no say with the police and decide to demand a new kind of police from the next politician.

Meanwhile, the terrorist tells the leader that they have very few weapons and need to arrange more.

The terrorist calls Raja when Vishnu very politely insults him.

Sameer ignores Vishnu and tells Raja to come inside the school and meet him.

The terrorist tells Raja to prove to him he is worth the job by entering the school on his own.

Anjali calls Arjun to come to the office otherwise the investors will feel bad and might cancel the deal which will adversely affect the business.

However, Arjun scolds her telling her that Kavya’s school is under attack and he is going there to save him.

In the meantime, Mahesh’s car gets stuck in the traffic while Preeta gets out and starts running on foot.

After a while, Raja comes towards the school in the mask and tells the police that he is with the terrorist and they should let him go or else the terrorist might harm the children.

Vishnu also comes behind him covering his face with his hands as his mask was torn.

© Copyright tellybest.com, 2022, 2023. All Rights Reserved. Unauthorized use and/or duplication of any material from tellybest.com without written permission is strictly prohibited.
Cached Saved on: Monday 21st of November 2022 05:17:09 AMCached Disp on: Thursday 1st of December 2022 12:51:48 PM