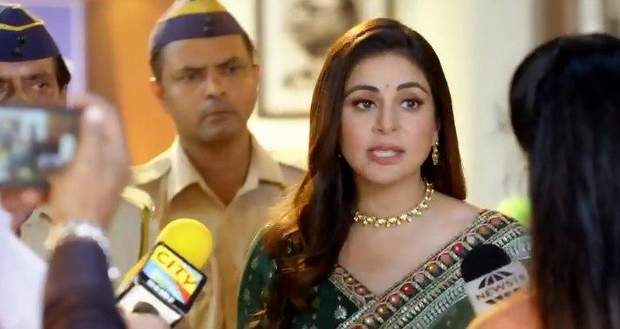 Preeta explains to Shrishti that as a wife she has no standing but as a Managing Director of Luthra Industries her voice is powerful.

Later, Preeta comes inside and finds Prithvi who instigates her by telling her that he has been waiting for this day for a long time.

He calls Preeta a match-fixer and praises her for loving money more than anything.

Prithvi also threatens Preeta for saving Karan as he will create problems for her and all of the Luthra family.

Preeta tells Prithvi that for her Karan is like a golden egg-laying goose.

Prithvi uses the opportunity to instigate Karan by making him overhear Preeta’s words.

Meanwhile, Sameer approaches the lawyer, who tells him that Karan's case has become very difficult but he will try his best.

On the other hand, Preeta tries to explain to Karan her reasons but Karan who is already upset with Preeta’s statement asks her to leave.

Before leaving, Preeta promises Karan that she will definitely prove him innocent.

After a while, Preeta arrives at the lawyer's office and hears distrust in his voice.

Preeta assures the lawyer of Karan’s innocence and asks him to have full faith in him and also give his best.

Later, Sameer comes to the police station to meet Karan and Shrishti also follows him inside.

In the meantime, Prithvi comes and pretends to be worried about Karan and creates a horrible picture of jail for the Luthra family.

Sherlyn observes Luthra’s reaction to Prithvi’s drama and smiles inwardly telling herself that these Luthras are so stupid that they are having expectations of the person who is responsible for creating the crisis in the first place.