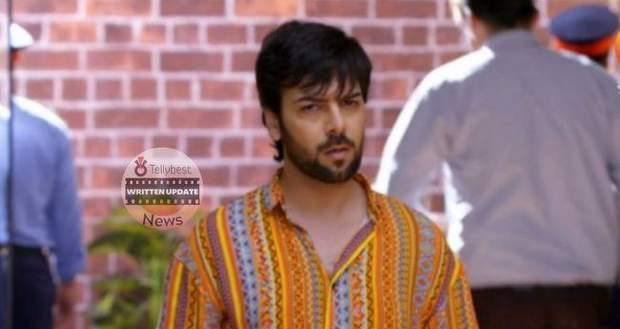 In return, the woman blesses her and tells her that her love will come back to her.

Meanwhile, Prithvi questions Arjun about getting violent to hear Preeta’s name and that he suspects Arjun has a double face.

Hearing Prithvi’s astute guess angers Arjun and he warns him to stay away from him and not concern himself with him.

Prithvi is unperturbed by Arjun’s anger and asks him to tell his reason for hating the Luthras and that one way or other he will take revenge on the Luthra.

Arjun gets Prithvi thrown away out of the office and warns him to never come back.

Anjali observes the scene and recognises Prithvi as Arjun’s enemy.

Meanwhile, Preeta is walking toward Rishabh’s office lost in her thoughts about the blessing of the vendor.

In the meantime, the guards throw Prithvi out while he tells them that he will come back soon as their boss and they will regret throwing him out.

Just then Prithvi observes Preeta coming his way and follows her.

After a while, Rishabh is pleasantly surprised to see Preeta in his office while Preeta tells him that she will try to come more often.

In the meantime, Arjun realises that Prithvi has burgled his office and looks for something that he has taken.

Seeing Anjali in his office Arjun tells her that Prithvi has some evidence against him that links him to Raja.

Anjali advises Arjun to take Prithvi seriously for he can become a problem for him.

In the meantime, Rishabh returns Preeta her mobile and asks the driver to safely take Preeta home.

Later, Prithvi arrives home angry while Sherlyn pesters him with questions and taunts.

Prithvi stops Sherlyn and tells her that Arjun has rejected his offer of joining hands with him and threw him out of his office.

Meanwhile, Rishabh gets the Pendrive from Kavya’s school and remembers Preeta’s agony on that fateful day.

Rishabh is watching the video on the laptop when Rakhi calls her and insists on talking to him.

Rakhi emotionally blackmails him and complains to him about Mahesh going to meet his girlfriend.

On the other hand, Sherlyn tries to convince Prithvi to let go of the Luthras while Prithvi tells her that his only aim in life is to destroy the Luthras and for that he will force Arjun to join hand with him so that they can take revenge against the Luthras.

© Copyright tellybest.com, 2020, 2021. All Rights Reserved. Unauthorized use and/or duplication of any material from tellybest.com without written permission is strictly prohibited.
Cached Saved on: Saturday 1st of October 2022 09:13:01 PMCached Disp on: Thursday 6th of October 2022 03:02:29 PM