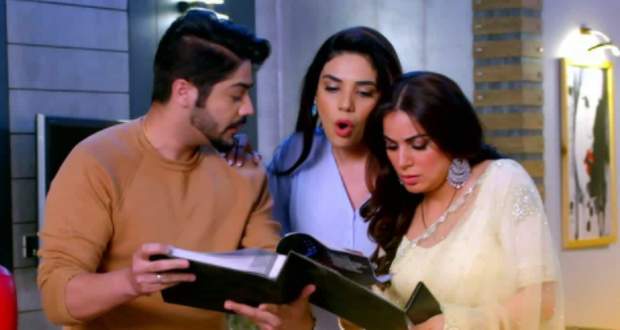 Today's Kundali Bhagya 25 January 2021 episode starts with Preeta asking Srishti and Sameer to follow Akshay and Ruchika’s every move. Meanwhile, Akshay says he is in love with Megha.

He says he can also divorce Kritika for her. He asks her to be his as he will give her money as well as love.

Megha agrees while Akshay is pleased to get one more girl in life. Akshay then decides to get revenge on Preeta.

Later, Sameer, Srishti, and Preeta follow Akshay while Akshay meets Ruchika. Ruchika and Akshay hug each other while Srishti and Preeta click their pictures.

Akshay tells Ruchika about the incidents from the party while Ruchika asks him to beware of the situation.

They go to eat Pani Puri while Srishti clicks their pictures. They further decide to follow them while Karan calls Preeta.

Karan apologizes to her for being rude while Preeta lies that she is with Srishti at home. Karan overhears horns and noises on-road and gets upset.

He wonders why Preeta lied to him. Later, Akshay and Ruchika reach Ruchika’s home while Preeta, Srishti, and Sameer also follow them.

Akshay leaves after dropping Ruchika while Preeta, Srishti, and Sameer follow her. They reach her home and find evidence while she is at neighbors.

They find photographs of her and Akshay and click them on phone. Ruchika comes with a baby and a lady and goes back to get milk.

Srishti, Sameer and Preeta sneak out of the house and decide to use the evidence. At night, Preeta returns to her room and asks Karan why he didn’t sleep.

Karan confronts Preeta about lying to him and shows his frustration. Mahira overhears this and gets pleased.