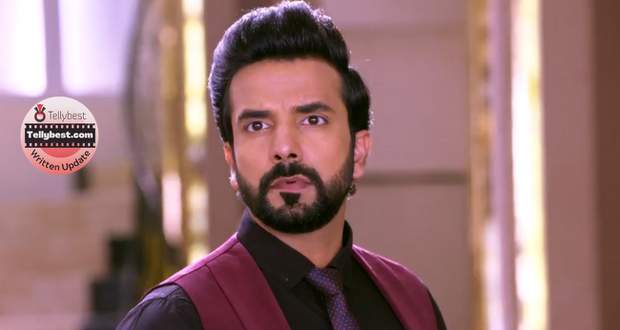 Today's Kundali Bhagya 25th January 2023 episode starts with Rishabh telling Rakhi to ask Preeta not to sacrifice herself for them and they will find a way to get out of this situation.

However, Rakhi gets angry and tells him that Preeta is doing the right thing by marrying Arjun who is Karan.

She tells him that she is tired of proving the truth about Karan.

Kareena reminds Rakhi that Rishabh is her son only and she should not talk badly with him.

In the meantime, Rishabh tries to tell Kareena that Preeta should not marry because he is his wife however he cannot put things in words.

Kareena understands Rishabh’s dilemma and tells him to leave everything to Bhagya.

Meanwhile, Anjali is regretting suggesting Arjun for a takeover as now Arjun got a reason to marry Preeta.

In the meantime, Rakhi tells Preeta that they are not doing anything wrong as Arjun is Karan.

However, Preeta is worried that why Arjun is not accepting being Karan because he cannot bear to be away from his family.

Preeta and Rakhi conclude that Karan must have lost his memory and not recognised them.

On being told that she will find out the reason for Karan’s deception, Rakhi thanks her for believing in her.

Prithvi is saddened to hear about Preeta accepting to marry Arjun.

Later, he concludes that everyone must have agreed because they think Arjun is Karan.

After a while, Shrishti tells Preeta that she is being emotional like Rakhi and it might be Arjun’s plan to make them believe that he is Karan.

Preeta asks her that can she really tell that they have been feeling Karan’s presence in Arjun.

However, Preeta tells Shrishti that she wants to find out why is he hiding his identity from them.

Just then Arjun calls Preeta to remind her about the marriage and tells her to get a divorce from Rishabh in a day or two.

Meanwhile, Rishabh overhears Arjun and gets shocked while Preeta feels guilty for putting Rishabh in such a position and apologises to him.

Rishabh tells Preeta that she has full faith in her and that she will do everything after thinking things through.

He tells her that he feels a bit sad but he understands that she always does everything for the family.

Preeta feels guilty and tries to apologise to him for not thinking about his feeling but Rishabh tells her that he has left everything to Bhagya.

He also tells Preeta with wet eyes that he will take care of all the formalities of the divorce and she does not have to worry about it.

Meanwhile, Kritika is back from her trip and is shocked to hear Arjun has taken over their family business and has proposed to Preeta which she has accepted to keep the Luthra in the house.

Prithvi who is eavesdropping on Kritika and Kareena calls them fools for thinking Arjun is Karan.

In the meantime, Rakhi comes to Preeta’s room with Rishabh and tells her that she wants to clear a few things in front of them both.

Rakhi tells Preeta and Shrishti that Rishabh agreed to marry Preeta to offer her protection against other people.

She also tells them that she tried to bring them together as husband and wife but it never happened.

She tells Rishabh that Preeta could never become his wife because she always loved Karan too much to forget him and now Karan is back and soon Preeta will marry him again.

Rakhi also tells them that tomorrow they will go to court to get him and Preeta divorced so that Preeta can find love again in her life and reunite with Karan.

© Copyright tellybest.com, 2022, 2023. All Rights Reserved. Unauthorized use and/or duplication of any material from tellybest.com without written permission is strictly prohibited.
Cached Saved on: Wednesday 25th of January 2023 08:46:32 AMCached Disp on: Tuesday 31st of January 2023 06:21:25 PM