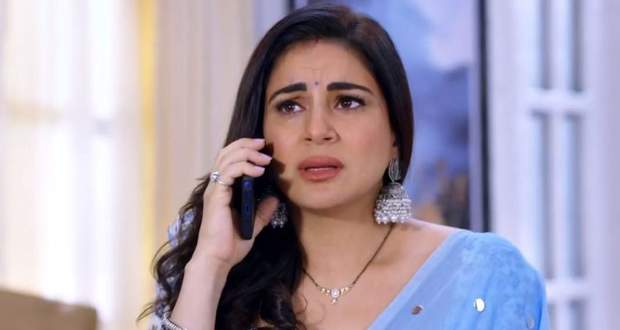 After a while, Shrishti and others arrive at the hospital and ask the receptionist about Rishabh.

Recognising Rishabh’s name, the receptionist directs them to the Operation Theater and tells them that there had been a lot of melodrama when Rishabh was brought in.

Luthras comes out of the Operation theatre after being scolded by the doctor.

Just then, Arjun comes after giving blood and looks at Preeta who is coming his way.

Preeta slaps Arjun while others look at her in astonishment.

Meanwhile, the goon is talking on the phone telling his mother to pray for Rishabh or else Arjun will kill him.

After a while, Anjali recognises the goon and slaps him for hurting Rishabh so badly.

The other goon pushes Anjali away and runs while Sameer catches her in time.

In the meantime, Preeta tells Rakhi that Arjun is responsible for Rishabh's accident.

She tells Arjun, that ever since she has seen her she has observed the vengefulness in his eyes because of some past event that has hurt him badly.

Preeta questions him for being at the place of the accident and blames him for Rishabh’s accident.

Anjali tries to explain to Preeta but Arjun stops her.

After a while, the doctor comes out and tells Preeta that it is because of Arjun that Rishabh is alive, for he not only carried him to the hospital but threatened the hospital into admitting Rishabh and donating his blood.

Preeta looks shocked at the revelation while the doctor tells her to be grateful to Arjun.

On the other hand, Anjali is upset at Preeta for slapping Arjun while Arjun tells her that he deserves it.

Arjun asks Anjali to call the car so that he can leave the hospital.

Preeta is feeling guilty for slapping Arjun while Kareena tells her that she will never stop being stupid.

Mahesh tells Kareena to not troll Preeta as she behaved badly based on her past experience with Arjun.

After a while, Rakhi finds Arjun and kisses his hand to show her gratitude for saving Rishabh.

Arjun hugs her and apologises to her while Rakhi tells him that she has saved her by saving Rishabh.

Missing Karan deeply, Rakhi tells Arjun that she has already half died after losing Karan and would have died as a mother if anything would have happened to Rishabh.

Afterwards, Kareena asks about Rakhi while Preeta tells them that Rakhi must have gone to Arjun.

© Copyright tellybest.com, 2022, 2023. All Rights Reserved. Unauthorized use and/or duplication of any material from tellybest.com without written permission is strictly prohibited.
Cached Saved on: Monday 21st of November 2022 08:36:43 AMCached Disp on: Thursday 1st of December 2022 10:29:10 PM