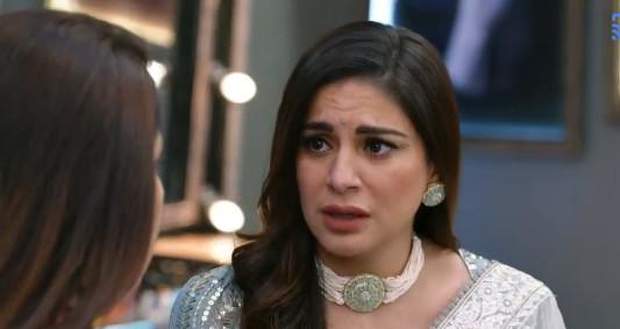 While the search is going on, Preeta praises Karan for keeping a watch on Prithvi.

Meanwhile, Kritika accuses Preeta of being happy about Prithvi’s distress.

On hearing Kritika’s accusations, Karan tells Kritika that he has heard Prithivi talking to Nagre.

After a while, Prithvi threatens the police to stop the search right away and accuses Karan of framing him.

Prithivi also asks for a search warrant hoping that it will stop the search.

However, Karan has come prepared and shows him the search warrant.

After searching the whole room police couldn't find anything.

Hearing the police's admission about not finding anything, Prithvi boasts about not being guilty.

Karan accidentally steps on a walking stick while leaving the room and lifts it up.

Seeing Karan with the stick, Prithvi gets agitated and asks the police to stop Karan from touching his things.

However, Karan, with the police's permission, opens its head and find the required papers while everyone else stares at the papers.

Prithvi denies any knowledge of papers and the stick after being caught.

However, the police do not listen to him and arrest him.

Karan is happy and looks happily at Preeta.

After Prithvi's departure, Kritika shouts angrily at Preeta for taking Prithvi away from her.

Afterwards, the inspector asks Karan to accompany him to the police station to file a complaint.

Meanwhile, Preeta is grateful to have Karan’s support.

Shrishti expresses her excitement at their victory whereas Preeta gives all the credit to Karan.

Alone in her room, Sherlyn is scared for herself.

Seeing Natasha, Sherlyn tells her about Preeta's plan and asks her to be cautious of her from now on.

At the Police Station, Prithvi misbehaves with the police inspector while being dragged to the cell but the inspector disciplines him promptly.

Karan comes to the police station to file an official complaint

Prithvi looks at Karan with hatred and tries to emotionally blackmail Karan by using Kritika’s name and accuses Preeta of manipulating everyone.

Karan attacks Prithvi but the constables stop him.

After a while, everyone takes selfies with Karan which makes Prithvi jealous.

To insult Karan, Prithvi mocks him for not being a real cricketer but no one pays any heed to him and asks Karan to go home.

At the Luthra mansion, Rakhi is expressing her happiness to Dadi and Kareena for Prithvi’s arrest. However, Kareena also feels ashamed for suspecting Karan.

Kritika is upset at Kareena and Rakhi for being happy about Prithvi’s arrest.

Meanwhile, Karan calls Sameer and asks him to look after Kritika as she is lonely at the moment.

Afterwards, Kritika is crying in her room thinking of Prithvi’s arrest while Sherlyn sees Kritika and decides to include her in her team against Preeta.

Sherlyn presents herself as a victim and assures Kritika of her support in time of need.

Preeta goes to the police station to meet Prithvi

At the police station, a constable informs Prithvi about someone coming to meet him while Prithvi thinks it to be Sherlyn but is astonished to see Preeta and makes fun of her.

Preeta is not instigated by Prithvi and tells him that she is here to give him his answers.

She tells Prithvi that she is back because of love and she treats Luthra's house as a temple, a place of worship.

Since she needed to clean the house of all the grime, therefore, she has removed him from there.

Preeta also tells Prithvi about framing him and compliments herself for understanding him so well.

Prithvi tells Preeta that despite her efforts the Luthra family will remain angry with her and will always reject her.

Unconcerned at Prithvi's talk, she also boasts of Karan's support as Prithvi has witnessed that day.

Before leaving, she tells him that soon Sherlyn will also come here to give him company.