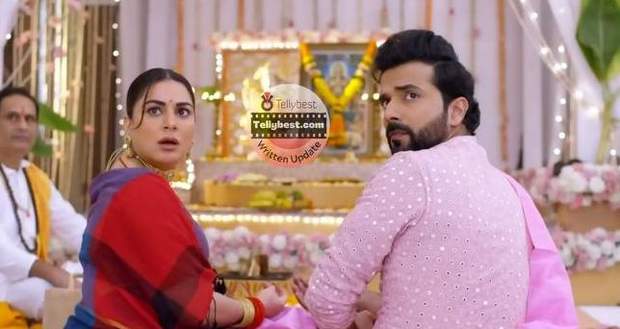 Today's Kundali Bhagya 25th November 2022 episode starts with Arjun getting offended at Preeta’s warning to stay away from Kavya.

He tells her that she knows in her heart that he will never hurt Kavya or anyone else in the family.

Arjun also accuses her of having feelings for him and that is why she does not want him to come anywhere near her.

Preeta looks stunned for a minute at the apt guess but tells him to not talk rubbish.

Just then Snigdha eavesdrops on their conversation while Preeta tells him that he should focus on the veneration and praying to God for which he is here.

Meanwhile, Arjun agrees with Preeta that he is here because of God only otherwise she hasn’t left any scope for him of being alive.

Just then he sees Snigdha and tells her the way to the bathroom.

Meanwhile, Preeta asks Snigdha about Arjun being mad while she tells him to stay away from Preeta.

Later, Mahesh asks Arjun to sit but he refuses and tells Rishabh that he has never done anything to harm them except for Raja's matter and for that he has already apologised to him.

Later, Pandit Ji tells Preeta and Rishabh to sit together and asks their husbands to fill vermillion in their wives' hairlines.

However, Arjun stops Rishab and drags Preeta up to stand beside him.

He tells Preeta that no one can fill vermillion in her hairline until he is alive.

Rishabh gets angry and begins to beat Arjun but he asks Preeta if she has recognised him.

The rest of the family looks in shocked silence but Arjun has eyes only for Preeta.

Later, Arjun stops Rishabh in the middle and pushes him aside with one punch.

He walks determinedly towards Preeta and tells her that he is her Karan.

Taking her hands in his, he walks towards the door to take her away however Preeta stops midway.

She tells Arjun that even if he is Karan then also she cannot go with him now as she is Rishabh Luthra’s wife.

Hearing Preeta’s decision, Rishabh stands beside Preeta and encircles her in his arms while Arjun looks shocked.

Just then he comes out of the daydream all sweaty and breathless.

He decides to leave or else he will not be able to control himself any longer.

Arjun tells Snigdha’s Dadi that he is waiting outside in the car as he has a headache.

Snigdha’s Dadi also leaves after Arjun and tells him that Snigdha will drive the car instead of him.

Arjun argues with her saying he does not want to risk his life but Dadi tricks Arjun and tells Snigdha to drive.

Rishabh thinks that if he could exchange places with Karan he would do it gladly for Preeta however he knows how impossible this is.

Meanwhile, Arjun also remembers Preeta and her declaration of being Rishabh's wife and feels suffocated.

Asking Snigdha to stop the car he gets out and vents about feeling hurt despite never treating anyone badly ever in his life.

In the meantime, the weather takes a drastic turn and winds begin to blow strongly making everyone restless and feeling dread.

Meanwhile, Anjali arrives at Luthra's house with the police and accuses Rishabh of molestation.

Rishabh and the rest of the family are shocked to hear Anjali’s allegation.