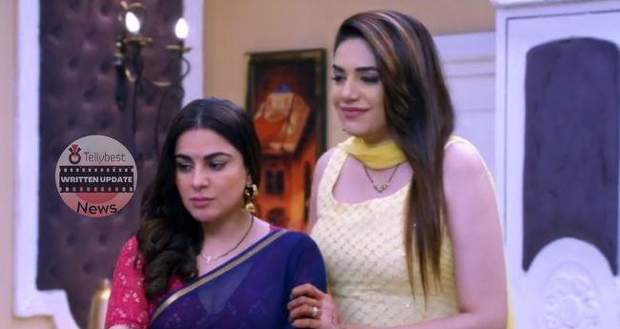 Today's Kundali Bhagya 25th October 2022 episode starts with the terrorist telling the police officer to let Vishnu and Raja come inside the school or else he will send someone outside but that someone will be a dead body.

The police helplessly let Vishnu and Raja go inside the school while the reporters start questioning the police.

Elsewhere, Rishabh keeps driving the car recklessly while shouting at Sameer to call the commissioner and also call Shristi to tell her to keep all the televisions turned off.

Meanwhile, Arjun and Preeta reach the school gates and demand to know the situation but the police officer harshly ignores them and tells them to let him focus on his work.

Inside the school, the teacher requests the terrorist to remove the tape from Kavya along with all the other students.

The main terrorist removes the tape from Kavya's mouth while telling all the kids that he will also throw them in the basement along with taping their mouths if they bother him once again.

On the other hand, Rakhi and the rest of the family members get stuck in traffic while Mahesh says that there is an ally from which they can find a taxi.

Preeta argues with Arjun and leaves from there while Arjun scolds the lady constable saying that she could not stop Preeta when it was needed.

Prithvi, who is hiding in the school, calls Sherlyn and informs her of all the drama happening and that the terrorists might kill Kavya.

Sherlyn gets excited and tells him that she is coming to the school to see the live telecast of the Luthra family's demise.

Meanwhile, Preeta and Arjun manage to find a hidden gate and go inside while a terrorist comes their way.

Arjun notices him and drags Preeta into a cornered area to save themselves.

At the school gate, police get bombarded with the parents of the students held hostage and try to calm them.

Rishabh reaches the school when the police commissioner calls them and assures them that no student will be harmed by the terrorists.

Apart from all of this, Kavya gives an idea to the students and the teachers who agree with her plan to make the chalk dust.

Then, the students throw the dust in the eyes of the terrorists and manage to escape from that classroom.

At the same time, Rishabh talks to the police officer and gets worried learning that Preeta had come here while thinking that he is sure Preeta is inside the school.

Arjun and Preeta manage to find the kids and teachers inside the school and help them leave while Prithvi hears some footsteps and hides.

The terrorists meet up with Raja and Vishnu and order them to find all the kids, especially Kavya.

Meanwhile, the rest of the Luthra family also arrives at the school gates and Srishti demands to go inside while Sameer tries to calm her.

Inside the school, Arjun hides behind a pillar as someone seemingly tries to follow him.

© Copyright tellybest.com, 2022, 2023. All Rights Reserved. Unauthorized use and/or duplication of any material from tellybest.com without written permission is strictly prohibited.
Cached Saved on: Monday 21st of November 2022 12:43:33 AMCached Disp on: Thursday 1st of December 2022 01:44:49 AM