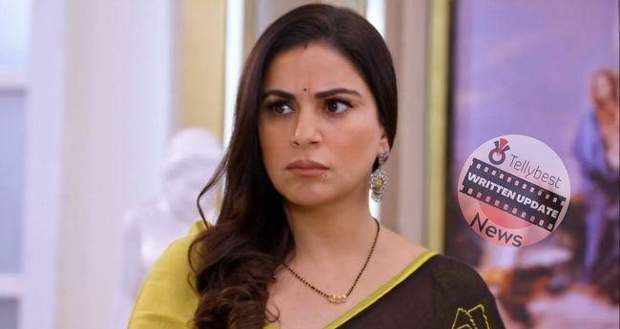 Today's Kundali Bhagya 26th August 2022 episode starts with Rakhi crying about Mahesh's past affair and telling Rishabh that Mahesh is still in touch with her.

Chuckling at their banter, Rishabh tells Rakhi that he is coming home and then they will talk on this matter.

Later, Rishabh has to leave for a meeting and forgot to watch the video which shows a clear shot of Arjun at school.

Meanwhile, Preeta's car faces some problems and she gets down to help some poor kids with food and toys.

Arjun also arrives there and is surprised to see Preeta on the road.

Just then weather changes and Arjun takes out his umbrella but it flows toward Preeta and she thanks Lord for giving her an umbrella.

Just then Arjun also comes under it and tells Preeta that it is his umbrella. Preeta does not believe him and they begin to fight over it.

Something Arjun said that takes Preeta back to a similar situation with Karan.

The chemistry begins to develop and the world ceases to exist for Preeta and Arjun as they lose themselves in each other's eyes.

After a while, Preeta’s driver breaks their trans informing Preeta about the car being repaired.

At the office, Rishabh is thinking about Preeta.

Meanwhile, Preeta and Arjun think about each other's encounters.

Later, Preeta asks the driver to take her to her mother’s house.

Arjun sees Preeta going inside and follows her.

Biji scolds Preeta for coming after so many days when Arjun rings the bell.

Preeta is surprised to see Arjun at her door while Arjun makes an excuse about his car breaking down so he came to ask for help.

Preeta suspects Arjun of lying and interrogate him for coming down here and knowing that it is her mother’s house.

Being cornered, Arjun distracts her by complaining to Biji about Preeta treating him poorly.

Preeta gets angry and they start to banter which reminds Janki of Karan and Preeta.

Later, Preeta makes tea for Arjun while Arjun teases her and calls her bitter like a bitter gourd.

Elsewhere, Sherlyn is venting her anger on the vegetable vendor when Prithvi asks her to stop so he can sleep.

Sherlyn gets angry with Prithvi and babbles about being poor and suffering at the hand of these poor people.

Just then Prithvi gets a shocking message and tells Sherlyn about Shambhu.