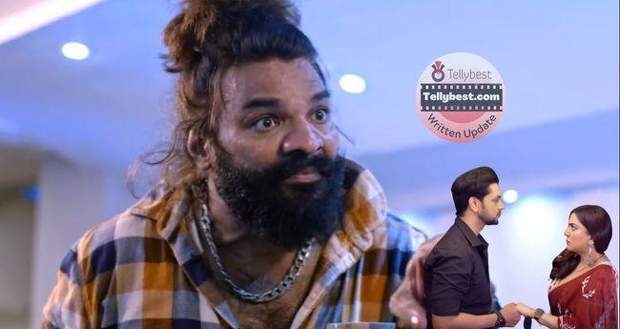 The terrorist pushes the air hostess away but allows Preeta to take Arjun who is bleeding profusely.

He also warns Preeta to not try and act smart otherwise her family will suffer.

Meanwhile, Rakhi, Shrishti and Kareena worry about Arjun when Kareena realises that Arjun is not their friend and that they are in this situation because of him only.

However, Shrishti tells Kareena that in-plane he felt more like a friend than an enemy.

Just then the terrorist asks them to keep quiet and be afraid of them.

However, Rakhi tells them that they are rude and they should be thankful to them for being in the aircraft.

Meanwhile, the terrorist asks his accomplice about the bullets that he is not able to find.

The accomplice tells him that the bullets are in the cargo and goes to get them.

In the meantime, a reporter finds out about the hijack and breaks the news.

Meanwhile, Dadi and Kritika put on the news and are shocked to hear that flight to New Zealand has been hijacked.

On the other hand, Rishabh and Sameer are at Arjun’s house telling Anjali that he would not have come there if Kavya is not involved in this.

He tells Anjali that he is aware of their petty tactics of stopping him from getting the loans and spreading rumours about him.

Just then Rishabh gets a call from Kritika who is crying incessantly telling him about the plane hijack.

Rishabh and others get shocked to hear the news and are leaving when Snigdha’s Dadi tells him that Arjun is also on the flight and will save Kavya, Preeta and Luthras like so many times before.

Meanwhile, Preeta is anointing Arjun with Dettol and asks him why did he come after them.

Arjun tells them that he has come after her and Kavya and that he will definitely marry her.

Preeta gets angry at Arjun and refuses to bandage him but Arjun reminds her of his oath and that he is injured because of her.

Preeta feels obliged and angrily cleans the wounds, which hurt him.

Later, Preeta corrects her mistake and properly applies a bandage to him.

Arjun is contemplating why he feels happy and peaceful when he is around Preeta.

Later, Snigdha’s dadi is watching the news and becomes worried about Arjun.

On the plane, the magician and card reader both are predicting that they all will die.

Just then Preeta comes out and Rakhi asks after Arjun while Preeta tells him that he is very bad.

A girl passenger tells Preeta to not fight with Arjun as he is so handsome which offends her husband and he tells Arjun to stay away from his wife.

Arjun looks stubbed at the warning while the husband tells Preeta to have a grip on her husband and put him in Burkha when he comes out.

Preeta and Kareena look shocked to hear Arjun call her husband while Rakhi calls Arjun to her seat and tells him that she will apply a black dot on him so he stays safe from evil eyes.

Later, she takes little Kajal from Preeta’s eyes and applies it to Arjun.

This initiates a banter between Preeta and Arjun.

Just then the terrorist arrives there and tells them to shut up and sit on their seats.

© Copyright tellybest.com, 2022, 2023. All Rights Reserved. Unauthorized use and/or duplication of any material from tellybest.com without written permission is strictly prohibited.
Cached Saved on: Wednesday 25th of January 2023 08:47:01 AMCached Disp on: Sunday 5th of February 2023 04:37:00 AM