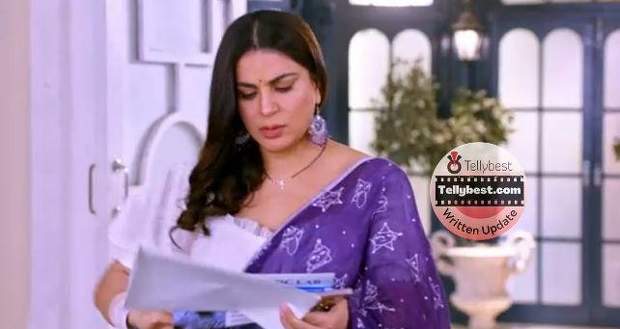 Today's Kundali Bhagya 26th January 2023 episode starts with Kritika trying to understand the situation and asks Kareena if Rakhi really has proof about Arjun being Karan.

However, Kareena tells her there is no point in talking about it as she can understand Rakhi’s pain.

Kareena tells Kritika that she also wants Karan to come back but she is sure that Arjun is not Karan.

Meanwhile, Preeta and Rishabh are at the judge’s office with their family to seek divorce on the grounds of non-consummation.

Rishabh explains the circumstance that forced them to marry each other.

He tells them to sign some papers and grants the divorce.

Rishabh watches the papers quietly with saddened eyes while Preeta looks at him with pity.

Later, Rishabh signs the papers and the judge grants them divorce.

Later, Arjun’s lawyer informs him about the divorce which makes him extremely happy and he asks Snigdha’s Dadi to call the pandit and tells him to meet at Luthra’s house.

Just then Priyanka calls Anjali and tells her that she is coming after sensing tears in her voice.

In the meantime, Arjun, Snigdha’s Dadi and Pandit Ji arrive Luthra mansion before the Luthras.

Later, Singdha’s Dadi tells Rakhi that they have come to fix the date for the marriage of Arjun and Preeta.

Mahesh gets furious at their audacity while Rakhi tries to cool him down.

In the meantime, Preeta meets Arjun’s eye while going to the kitchen and recalls several moments when their gazes have collided.

As Rakhi stands to get Preeta’s Kundali, Mahesh objects to the drama but Rishabh stops him.

In the meantime, Srishti comes to Arjun asking him to have a talk with him outside.

Meanwhile, Mahesh asks Rishabh how can he be calm about letting Preeta marry Arjun.

Rishabh tells him and Sameer that he is not happy but he has no say in the matter as both Preeta and Rakhi are in favour of this marriage.

He also tells Sameer that he has promised Preeta that he will not stand in her way no matter what he feels about her.

Later, Priyanka comes to Anjali who is crying incessantly and tells her about Arjun getting married to Preeta.

On being told to control her emotions, Anjali tells her that she will lose Arjun forever if he marries Preeta.

Meanwhile, Prithvi who has heard Anjali’s feelings comes to her room pitying her and tells her that only he can get her what she wants and in return, he only needs some money from her.

Anjali gets angry and throws Prithvi out of the house.

In the meantime, Arjun tells Shrishti that he is marrying Preeta because he wants to own everything that belongs to Rishabh.

Shriashti gets angry and tells Arjun that Preeta is marrying him only out of helplessness otherwise she would never do this because she is Rishabh’s wife and respects him immensely.

Arjun smiles at Shrishti’s anger and tells her that she can start calling him Jiju from the day after tomorrow as that is an auspicious day to get married.

Shrishti looks shocked to hear the marriage taking place so soon and vehemently tells Arjun that she only called Karan Jiju and will never call anyone else that.

Meanwhile, Anjali calls security to get Prithvi out of the house while he shouts to her that he can get Arjun for her.