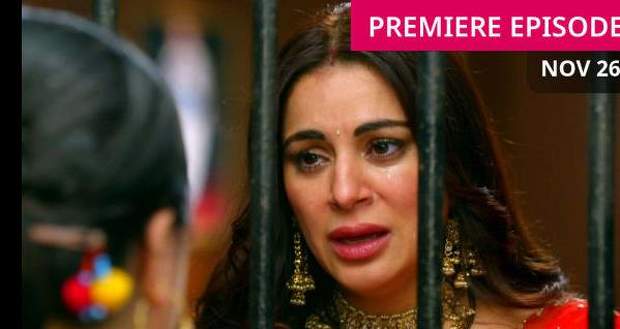 Today's Kundali Bhagya 26 November 2020 episode starts with Janki blaming Sherlyn for everything and asks her to come along to jail. Rishabh overhears this and questions Sherlyn about it.

Sherlyn says Rishabh never trusts her and further blames Sarla for trying to kill her baby. Srishti and Karan take Sarla’s side while Sherlyn says Preeta also fell sick because of Laddoos.

Mahira supports Sherlyn and states she should have waited for the reports. Sherlyn says the family needs to believe her and that the cat also died because of the poison.

Kareena sides with Sherlyn and rebukes Srishti. Further, Srishti states that Sherlyn has made the whole plan to get Sarla arrested.

Preeta gets worried for her mother and rushes to meet her in jail. Mahira is delighted with her plan and informs Ramona about everything.

Ramona says that just one step is left in their plan. Later, Preeta reaches the jail and gets emotional to see her mother behind the bars.

Sarla wants her to be in her Sasural on Karwa Chauth day. Preeta refuses to leave and wants to save Sarla.

Sarla wants her to complete her Pooja first as Karva Chauth is a very important day for a wife. She wants her to stay strong and not give up.

Preeta leaves the jail with a heavy heart. Meanwhile, Sherlyn tries to prove her innocence while Janki tries to show her true face.

Mahira points out that Preeta is not there and lies that Preeta was saying their Laddoo plan got successful. Karan doesn’t believe Mahira while Sherlyn calls the doctor to confirm.

The doctor reveals that the Laddoos contained poison leaving everyone shocked. Karan still can’t believe that Sarla can do it while Sherlyn does emotional drama.