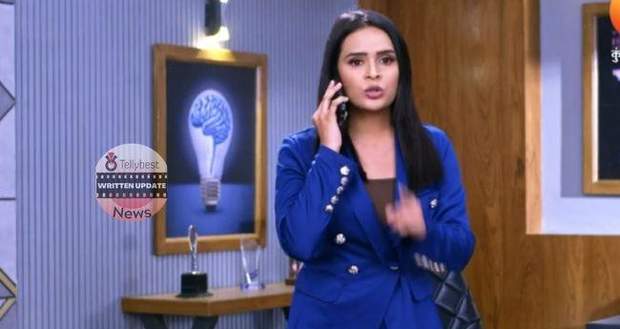 Arjun gets scared for a second while Preeta scolds him for coming here if he gets afraid so easily.

As she leaves him, Arjun asks her to tell him if she finds Kavya because he is going to search for her in another direction.

Meanwhile, Sherlyn stops Rishabh from going inside the school.

Rishabh tells her he doesn't have time for her rubbish since Kavya is in great danger.

On the other hand, the terrorists get confused when they don't see any children inside the classroom.

Meanwhile, Kavya's teacher asks her to be quiet or otherwise, the terrorists will come & catch all of them.

Just then, Preeta finds Kavya and hugs her close to her chest.

However, their voice gets heard by the terrorists who barge inside the classroom but all of them hide behind the wall safely.

After the terrorists leave, Preeta asks herself where Arjun is while Kavya gets excited that Mr. Handsome is also here.

Outside the hall, Prithvi carries himself, hiding behind a board, and feels thankful to the terrorists for targeting Kavya, a task he couldn't perform.

Saying that everything good happens for a reason, Prithvi suddenly sees Arjun who trips over a flower pot.

Prithvi then promises to take his revenge on Arjun with the help of terrorists who are on a quest to kill all the schoolchildren.

Outside, Sherlyn informs the police officer that Rishabh Luthra has entered the school from the back door, shocking Rishabh's family.

Prithvi scolds them and says they are blind if they consider a man with a ponytail and swaggy fashion sense to be a teacher.

The terrorists laugh at Prithvi who seems like a cartoon character to them.

He then smartly says he knows all the secret locations of this school.

The terrorists tell Prithvi that he can be their partner in the crime world but Prithvi's only intention to mingle with them is to kidnap Kavya.
Meanwhile, the officer catches hold of Rishabh and asks him to wait as other police people are going inside dressed as teachers.
Later, Arjun intentionally gets caught by one of the terrorists so he can take him to Kavya.
To download Kundali Bagya all episodes or watch online today's (26 October 2022) latest full episode, go to zee5.com
Share

© Copyright tellybest.com, 2022, 2023. All Rights Reserved. Unauthorized use and/or duplication of any material from tellybest.com without written permission is strictly prohibited.
Cached Saved on: Monday 21st of November 2022 06:55:13 AMCached Disp on: Thursday 1st of December 2022 01:07:43 PM