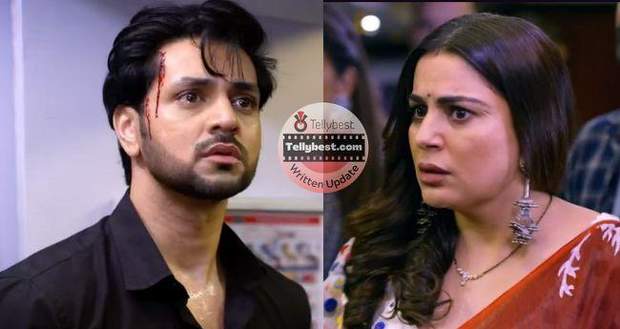 Today's Kundali Bhagya 27th December 2022 episode starts with Shrishti telling the terrorist the she has not seen Preeta and Arjun fight which reminds her of Karan.

However, Arjun tells her that to fight there has to be a reason.

This instigates Preeta and she starts to banter with Arjun.

Seeing Rakhi favour Preeta and Arjun, Kareena asks her if she is drunk.

However, Rakhi feels offended and tells Kareena that she is not that kind of a person and it is better to watch Preeta and Arjun banter than be scared of the terrorist.

Just then the magician stands up and asks the terrorist to let him go to the cargo as his man might not know where not to go.

However, the terrorist hammers the magician when he tries to go himself.

The magician tells them that everyone will die before going unconscious.

Meanwhile, Sameer calls Kritika to ask about Dadi’s condition and tells her that they are on the way.

In the meantime, Dadi wants to go to the Police station but Mahesh comes there and tells her to not go anywhere and pray for their family as that is all they can do.

Later, Anjali arrives at the police station and gets bombarded by media questions.

She tells them that someone very important to him is on that plane.

Afterwards, she goes inside the police station to ask about their plan of action and Rishabh and Sameer also joins them.

The police tell him that officers are at work and soon something will be done to save the passengers.

Anjali tells Rishabh and Sameer that ever since the Luthras came into their lives they have only been in one problem to another.

Rishabh gets angry and follows Anjali.

Meanwhile, the inspector is with the commissioner telling him that he is here to ask for his help as he does not know what to do and how to deal with them.

The commissioner tells him to find a way to save the passenger and pay up the demands till the end.

At the plane, the terrorist has had enough and tells them that he has hijacked the plane and yet no one is scared of her.

At the same time, the magician tells Preeta that he is transporting poisonous snakes to New Zealand and that if someone accidentally opens the snake container then everyone will die.

Meanwhile, the terrorist in the cargo is unaware of the danger and is looking for bullets.

Meanwhile, the snakes have awakened in the box and break free when the box falls on the ground and opens up.

Later, the terrorist is attacked by the snake and scares everyone with his scream.

Elsewhere, Rishabh argues with Anjali for only caring for Arjun when they all are suffering from the same emotions.

Rishabh calls Arjun a curse who is not leaving them alone despite their efforts to push him back.

However, Anjali tells them that he is not the curse but a blessing and is not Arjun but Karan whom he and Preeta has killed many years ago.

Rishabh and Sameer are shocked to hear this news while Sameer tells him that Anjali is lying.

Just then Dadi and Kritika arrive there and tell Rishabh that Anjali is not lying as she has also felt Karan in him.

However, Anjali comes out of her reverie and realises her confession is nothing but a dream.

Later, the terrorist decides to get an update on their demand and after that, they will check on their accomplice.

© Copyright tellybest.com, 2022, 2023. All Rights Reserved. Unauthorized use and/or duplication of any material from tellybest.com without written permission is strictly prohibited.
Cached Saved on: Wednesday 25th of January 2023 08:56:34 AMCached Disp on: Sunday 5th of February 2023 03:40:01 AM