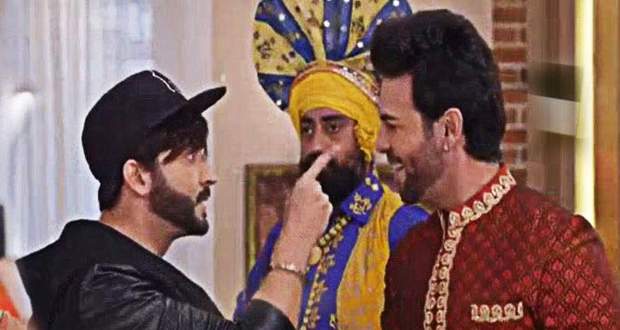 Prithvi tells Sherlyn that he truly loves her but she beats him again and asks him that why he married Kritika.

So Prithvi gets angry and holds Sherlyn's neck. He warns her to not ask this question again otherwise he will kill her.

Meanwhile, Preeta meets Kritika and asks about Prithvi. As Prithvi is not in the room they both go in search of Prithvi.

On the other hand, Prithvi somehow consoles Sherlyn.

But Preeta gets to know that Prithvi is in Sherlyn’s room and calls Kritika.

They both search for Prithvi in Sherlyn’s room but Prithvi hides under the bed and escapes from them.

On the other hand, Karan struggles because of muscle cramps and calls Preeta. Mahira comes to help him and applies the ointment.

Later Kritika tells Preeta to wait and she goes to the washroom.

Prithvi enters the room and tells Preeta that he came to Luthra’s house only for Preeta.

Meanwhile, Kritika comes back while Preeta pretends everything is okay and leaves the room.

Prithvi tries to manipulate Kritika’s thought that Preeta is still in love with him.

But Kritika defends Preeta that she is in a good relationship with Karan.

Later Preeta sees Mahira with Karan and gets angry. Mahira pretends to be sorry and leaves.

Karan gets Preeta into a good mood and leaves for cricket practice.

On the other hand, Srishti in Arora's house is thinking about a plan to separate Prithvi from Kritika’s life while Sarla comes.

Srishti tells about Kritika’s marriage to Sarla. Sarla cries knowing about this as this could be a threat to Preeta.

Mahira tries to seek Karan’s attention and askes him of they can reunite like before.

© Copyright tellybest.com, 2020, 2021. All Rights Reserved. Unauthorized use and/or duplication of any material from tellybest.com without written permission is strictly prohibited.
Cached Saved on: Wednesday 20th of October 2021 06:39:19 AM