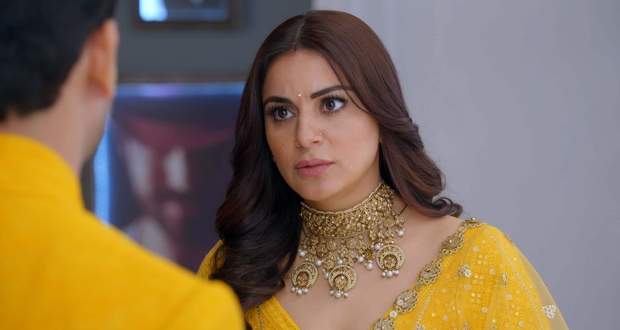 Today's Kundali Bhagya 27 January 2021 episode starts with Sarla getting worried for Preeta. Sarla decides to video call Preeta and shares her emotions with her.

She also asks Preeta to not get in trouble while saving Kritika. Preeta assures her mother that she will handle everything.

Srishti is about to leave for Luthra house when Sarla stops her. Srishti insists on going while Sarla asks her not to go as she might increase Preeta’s problem.

Janki tries to console Sarla but she is adamant about her decision. Srishti is tensed and decides to leave by the window to see Aditya’s face when he is exposed.

The Haldi function starts and Kareena greets the guests. Akshay starts his acting of praising Kritika while Preeta asks Sameer if all arrangements are done.

Karan asks Preeta to not create any drama and also tells Kritika that he will miss her. Kritika apologizes to Preeta and says she feels lucky to have her.

Akshay takes away Kritika while Preeta gets upset. Akshay drags Kritika to a room and her hand hurts.

Akshay apologizes for hurting her and later shows his annoyance over Kritika hugging Preeta. He asks Preeta to break all ties with Preeta.

Sherlyn gets pleased to witness the scene. Later, Akshay confronts Preeta and they get into an argument.

Akshay mocks Preeta for having no say in the house. Preeta is still adamant to bring his reality out in the open.

They both challenge each other while Karan overhears this. He asks about their challenge while Akshay lies that Preeta was apologizing to him.

Preeta tries to tell the truth while Karan asks them to join the Haldi function. Meanwhile, Sameer overhears someone saying bad things about Akshay.

© Copyright tellybest.com, 2020, 2021. All Rights Reserved. Unauthorized use and/or duplication of any material from tellybest.com without written permission is strictly prohibited.
Cached Saved on: Tuesday 9th of March 2021 02:41:03 AM