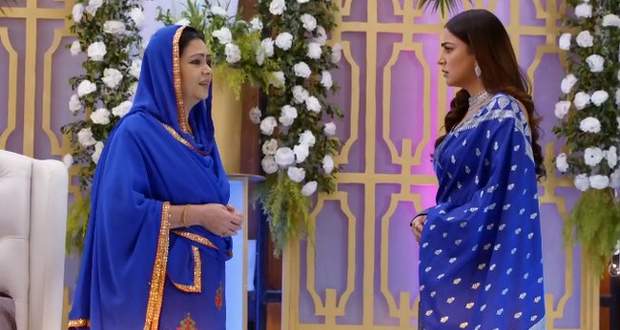 Today's Kundali Bhagya 27 Jan episode starts with Preeta climbing up onto the stage to deliver her further speech.

Natasha asks Prithvi to just wait for Preeta to get trapped into her plan.

Meanwhile, Sherlyn talks to Natasha calmly to make her understand that the plan may get wrong.

At the same time, Sameer passes from there and overhears Natasha disclosing her plan to Sherlyn.

Sameer imparts the information to Karan about Preeta being in danger.

Karan immediately jumps onto the stage, stopping Preeta from holding the mic at the same moment.

Karan makes a pretense of wanting to dance with Preeta while Preeta is surprised due to the sudden interruption.

Sameer plays a romantic number and Karan and Preeta dance together.

Meanwhile, Sameer removes the open wire from the mic, making it safe for Preeta to use.

On the other hand, the investors are very much impressed by Preeta and her idea for the business.

To stop investors from investing in the company, Prithvi decides to disclose to the world about Mahesh Luthra’s health condition, who is the face of Luthra Industries.

Further on, Sherlyn asks Prithvi if they will succeed in ruining Preeta.

Prithvi confidently affirms that they will succeed in their next plan.

Meanwhile, Preeta thanks Karan for saving her life.

Karan makes Preeta’s breath hitch saying that she is his life and he remembers all the vows that he made while marrying her.

Preeta turns around in her place, not able to face Karan with a straight face.

Consequently, Karan asks Preeta to not distance him from herself that much that he cannot return when she wants him.

As the episode unfolds further, the story gets interesting as Prithvi pays the snake charmer to scare Mahesh Luthra to his core.

The snake charmer does as asked. He leaves the snake in Mahesh’s room.

Upcoming Kundali Bhagya episode: Prithvi advises the investors to not invest in the Luthra company.