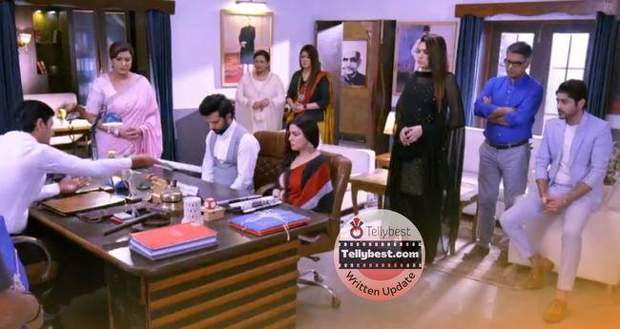 Today's Kundali Bhagya 27th January 2023 episode starts with Arjun and Preeta looking into each other eyes.

He tells her to answer honestly what he is about to ask while Preeta tells him that he will also have to answer her one question with the same honesty.

Arjun nods in agreement and asks her why has she agreed to marry him.

Preeta tells him that she felt that to be right and then brings Rakhi and her family as her shield.

Preeta looks anxious when Arjun asks about her but tells him that he only asked for one question.

Arjun tells her that she can also have two questions.

Preeta asks him why he wants to marry her while Arjun comes closer and tells her after holding her arms that he likes no one other than her.

Meanwhile, Anjali stamps her foot in anger telling Priyanka that Prithvi makes her angry by popping up from anywhere.

Priyanka tells her to think about Prithvi’s offer as he can be of great use to her.

Meanwhile, Arjun asks Preeta that will she marry him even if he gives her the choice to escape this marriage.

Preeta tells him yes and that she likes thinking about him and feels happy when he is around her. She tells him that she has always thought about him and that he is her everything, her life, happiness and love.

Arjun looks at her while Preeta wipes her tears and tells him if that is what he wants to hear then he is mistaken because she is only marrying him so that she gets an official license to irritate him.

Arjun looks surprised at her while she tells him that he still has time and can back off now.

However, Arjun tells her that he will not back off at all but will double trouble her if she dares to trouble him after marriage.

Preeta wipes her tears again and walks away from there.

Elsewhere, Prithvi calls Sherlyn to open the door as he is busy playing the game.

Sherlyn scolds him while opening the door but gets shocked to see Anjali.

Prithvi looks at Anjali and tells Sherlyn to shut the door on her as he is not interested in talking to her.

In the meantime, Anjali comes to him requesting him to help her but Prithvi continues to be a sourpuss and tells her that he is not ready to help her.

On being asked, Prithvi explains the matter to Sherlyn and gives the account of the humiliation he suffered at Anjali’s house and that is why he refused to help her.

However, Sherlyn tells Anjali that if Prithvi will not help her then she will because she cannot let Preeta win.

After a while, Pandit Ji tells them happily that both the Kundalis are a perfect match but there is only one problem on the Wedding date.

Shrishti misunderstands Pandit Ji and tells him that they are not in a hurry however, Pandit ji tells them that day after tomorrow is a very good day for a wedding.

Arjun becomes happy and tells Rishabh that he is settling in the guest room for now but will be using his room after the wedding as it is the best room in the house.

Meanwhile, Prithvi tells Sherlyn that she cannot do it without him and tells her to go and try her luck.

However, Sherlyn reminds him that it is he and not her who always needs help and that too from her.

Anjali once again requests Prithvi to help her and Prithvi agrees to help her.

Just then Arjun calls Anjali and tells her about the news of his wedding date.