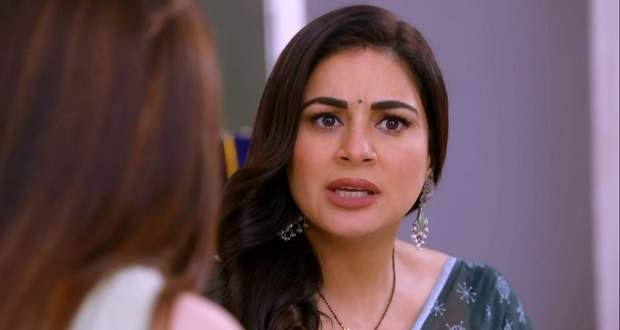 Kavya tells him that he is cute like a girl and should apply nail polish on his hands.

Kavya breaks Preeta’s favourite decoration piece and tells Rishabh that she knows how to cajole Preeta.

Rishabh asks Kavya to tell her how to woo Preeta.

Just then Preeta comes in while Kavya changes the subject and lies about it too.

Preeta understands their game plan and asks them what they want from her.

Rishabh tells Preeta that they should go to Arjun and apologise to him.

Meanwhile, Anjali sends the goon out and tries to close the door when their leader comes in asking for Arjun.

Holding Anjali by her throat, he asks for Arjun. Anjali hits him with a vase and shuts them in a corridor.

Meanwhile, Preeta is getting ready when Shrishti comes in and complains to her for keeping secrets from her.

Preeta tells Shrishti that she does not want to go to Arjun’s house to apologise nor does she feel sorry for slapping Arjun before but this time she knows he has saved Rishabh’s life.

Preeta also tells her that seeing Arjun something happens to her as her girly senses wakes up when she is with him.

Preeta tells Shrishti that Arjun’s touch feels familiar to her and it seems that he is hiding something and showing something else and that makes her uncomfortable.

Shrishti feels puzzled and tells Preeta that she gets good vibes from Arjun.

Meanwhile, Anjali comes to Arjun to tell him about the goons.

Elsewhere, Shrishti comes to Kritika asking her to go for a movie Ek Villain with her.

Rishabh tells her that Preeta and Arjun’s fight remind him of her fights with Karan.

Preeta tells Rishabh that she is feeling awkward going to Arjun’s house.

Meanwhile, Anjali tells Arjun to not go to the goons but he enters the corridor.

Raja asks Arjun why has he not paid the money to his man.

Arjun tells him that he has not paid him because he did not do what he wanted which has added to his stress as well.

Raja threatens Arjun and tells him that he wants his money with interest else he knows how to get it out.

Arjun gets angry while the goons capture him from all sides.

Arjun remains cool and shows his gun to them which scares them.

He also tells them to apologise to Anjali.

© Copyright tellybest.com, 2020, 2021. All Rights Reserved. Unauthorized use and/or duplication of any material from tellybest.com without written permission is strictly prohibited.
Cached Saved on: Sunday 2nd of October 2022 02:38:41 AMCached Disp on: Wednesday 5th of October 2022 05:46:39 PM