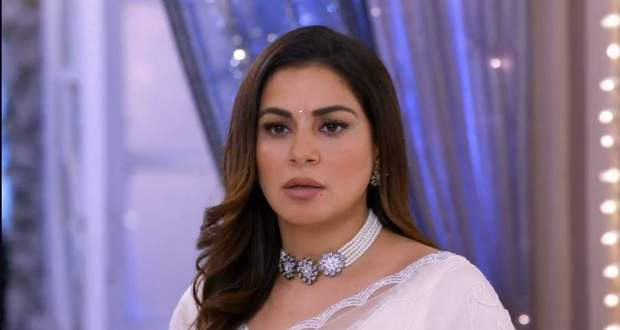 Today's Kundali Bhagya 27th May 2022 episode starts with Shrishti calling Preeta and telling her that her friend was posing as an inspector in Natasha's arrest.

Later, Shrishti tells Natasha that they will blindfold and leave her in a deserted house and asks her to not make a scene.

Prithvi asks Preeta about her call while Preeta tells him that it was Shrishti’s friend and tells him its nothing new for him.

Seeing Preeta walk away, Prithvi feels helpless to not call Preeta on her deceit as he has no time now.

In the meantime, Karan comes to Preeta’s room looking for her when he spots her leaving dressed in his clothes and follows her.

Sherlyn is crying in her room over Natasha’s threat and panicking while Prithvi asks her to calm down.

Prithvi tells her that Preeta is playing games as Natasha's police were fake to stop Karan’s engagement.

Sherlyn gets angry at Preeta while Prithvi tell her that now is not the time to worry about her as they have the blackmailer to deal with.

Afterwards, Preeta leaves in her car while Karan follows her out of curiosity.

Meanwhile, Shrishti and Sameer are doing the final check and call Preeta.

After a while, Prithvi asks Sherlyn to call the Blackmailer and ask him to come to new place.

Sherlyn calls Preeta and tells her to come to another location which she agrees.

Preeta wonders what to do next when she spots Karan’s car.

Prithvi tells Sherlyn that he will give money to Dubai Don instead of this blackmailer and gives a location for Preeta to come.

After knowing the location, Preeta calls Shrishti and tells them of a change of plan.

Sameer tells her that it is too far.

Prithvi tells her that today blackmailer will get nothing but death.

Hearing footsteps Prithvi send Sherlyn out and tells her to keep the car running.

Preeta recognises Prithvi and asks him about the money while Prithvi asks about the CD.

He tells her that everything is recorded on the CD and he knows everything.

Prithvi is surprised to be recognised and asked the Blackmailer to hand over the CD.

Preeta fibs about the CD containing his meeting with Dubai’s don and that she knows everything about him.